These Japanese robot toys make up the rare set known as the “Gang of Five.” Made by Masudaya in the late-1950s and early-1960s, they are highly prized by toy collectors today.

The market for these particular robots stems from the fact that they were game-changers in the toy world when they were introduced. For one, their size was unlike any other robot on the market at that time. They also had features that had never been seen before. For example, Radicon was the first wireless remote-controlled robot toy on the market.

All of them are rare, but Machine Man is, by far, the rarest of them all. “Machine Man was made for only one year – 1960 – and it had to be specially ordered from an importer,” says Tommy Sage, Jr., the head of Morphy Auctions’ toy division. “The other four could be ordered from a catalog, but not Machine Man.” 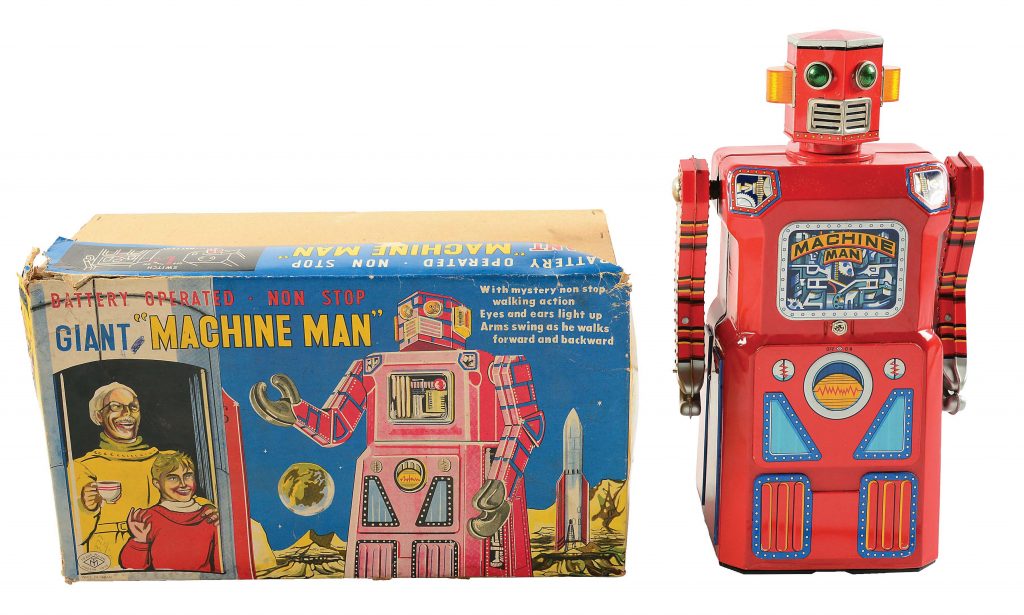 Because of the extra steps required for ordering Machine Man, he was produced in much smaller numbers than the other four in the gang. As a result, probably less than a dozen exist today. Of those, Sage estimates that only two or three exist in their original box. Stressing the rarity, Sage notes that, “We’ve only sold two unboxed ones in the past 20 years.” One sold in 2012 for $45,600 and the other sold in 2019 for $86,100.

Collectors know that vintage toys can be hard to come by in good condition, but their delicate cardboard boxes hardly ever survive. That’s why the robot being sold in the September 2020 toy sale is so special: it still has the box, complete with the original insert! Aside from the robot itself being in great shape, there are great graphics on the box showing the robot at work on a foreign planet, while a man and woman enjoy a cup of coffee and watch the robot work. 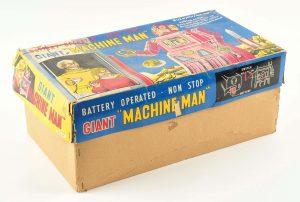 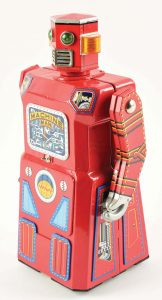 Unlike most kids’ toys that spent their days being played with, banged around, used up, and discarded, this Machine Man robot led a very different life. “It came from an attic, right from the original owner, who had it as a child but didn’t play with it for some reason.” Sage describes the toy as being “in near mint condition, with the box being in very good condition.”

Resisting the urge to play with a toy as a child has created the opportunity for that decision to pay off big. Sage has given the robot a pre-auction estimate of $60,000-$90,000. “For the serious toy collector,” says Sage, “this is a once-in-a-lifetime opportunity.”

John Browning’s 1911 is arguably the most iconic handgun...

With the majority of people now completing transactions with...