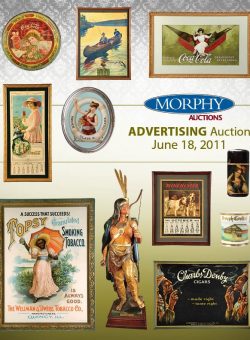 | Add to Calendar |
Facebook Twitter Email
Auction starts at 9AM
On preview now.
Extended Hours:
6/17/11 > Open until 8PM
6/18/11 > Doors open at 7AM
Gotham Cigar Museum Collection expected to light up Morphy’s June 18
Antique Advertising sale
A superb collection of early tobacciana will be smoking its way across the auction block on June 18 as Morphy’s presents a 900-lot Antique Advertising sale featuring the specialty collection of the Gotham Cigar Museum of Tampa, Florida.
“It’s amazing how many different types of cigar-related items are sought after by collectors. This premier collection traces to the early days of the cigar industry in America and includes everything from cigar boxes to hand-painted cases to beautiful die-cuts and figural advertising pieces,” said Dan Morphy, owner of Morphy Auctions.
In the 1990s, the owner of the featured collection became interested in the history of “clear” Havana cigars – those that were rolled in the United States in pre-embargo days (before 1963) using Cuban tobacco. “At one time, there were ten of thousands of factories, all over the country,” the collector said. “I began collecting remnants from days gone by and became interested in the actual history of clear Havana cigars, cigar boxes, cigar art and advertising.”
The selection of cigar boxes to be auctioned includes not only rare and beautifully lithographed boxes, but also cigar containers that were artistically “recycled.” Some were skillfully notched and carved into decorative, sometimes practical articles – what collectors call “tramp art.” Other cigar boxes served as painters’ canvases, like the unique pedestal-style tramp art box with a baseball-theme interior image. It may be the only extant example. Another prized piece is a cigar box whose lid was skillfully painted with an attractive early American wooded landscape scene.
Expressions of fine artistry are also seen in the collection’s mid-19th-century hand-painted and lacquered papier-mache cigar cases. Considered connoisseur’s pieces, these cases were expensive, high-end productions with pullout sleeves to house the cigars.
The collection also features many glass items, including advertising change trays and paperweights with a crossover gambling theme. “Each paperweight contains five dice and could be used as game,” the collector explained. “You’d shake it and whoever got the best ‘hand’ – a straight or three of a kind, four of a kind, etc. – was the winner.”
A variety of exquisite advertising die-cuts is included in the collection. One such piece, promoting Class A Cigars, depicts a girl dressed in an early “sailorette” uniform, waving goodbye with a hankie. Another eye-catcher is the large 4ft-tall by 3ft-wide hand-painted and signed 1874 advertisement for Commodore Ritz Cigars that features the image of a dapper gentleman with prominent moustache and hair parted in the middle.
A select grouping of countertop chalkware cigar store figures featuring busts of nymphs and Indians also will be offered. Three large, highly detailed – and very heavy – bas-relief tobacco-advertising pieces were cast in plaster and framed for wall display. These huge advertising pieces dating to around 1860-1870 measure 4ft by 5ft and were fabricated for the oldest Cuban cigarette maker, La Honradez. “They were offered to me by a collector in Argentina. It’s possible that they are the only surviving examples of their type,” said the collector. The collection also includes approximately a dozen pre-embargo Cuban cigar humidors, many of them carved from rare native Cuban woods.
The auction also includes a number of non-cigar-related tobacciana lots. One of the highlights is a Topsy Tobacco 2-sheet poster with a stunning image of the “Topsy Girl” – known to collectors from the famous Topsy blinking-eye figural clock. The poster is expected to make $20,000-$30,000.
Two cigar store Indians ( Lots 812 & 813) will be offered. One of them is made of zinc, possibly by DeMuth, and depicts a brave with a hunting bow on his back. The other is a carved-wood maiden attributed to Yeager. Each is estimated at $20,000-$30,000.
An exceptional array of hunting and fishing pieces marks the launch of Morphy’s new Sporting Antiques department headed by Jeff Sloyer. Among the key lots are a 1907 Bristol Steel Rods calendar with the image of a man and woman fishing from a canoe (est. $2,000-$4,000), a 1920 South Bend Lures tri-fold window display in its original box ($2,000-$4,000), and an especially nice 1925 Winchester Arms sign featuring hunting dogs ($2,500-$5,000).
More than 300 lots of soda pop items will be auctioned, with a strong emphasis on Coca-Cola antiques. An early 20th-century trolley car sign could make $6,000-$10,000; while a 1903 tip tray in near-mint condition is estimated at $3,000-$5,000. The extensive selection of early “pretty ladies” calendars includes examples from 1904 ($2,500-$5,000), 1907 ($4,000-$7,000) and 1913 ($6,000-$9,000). The most elusive entry is the 1919 calendar estimated at $8,000-$12,000.
Antique occupational shaving mugs have been a hot ticket in Morphy’s past few sales. “It seems we’ve drawn a large number of additional buyers into the shaving mug market,” Morphy observed. “The new crossover interest is coming from toy, automobilia and folk art collectors.” In the June 18 sale, 100 lots of the coveted mugs will be presented. Dan Morphy’s top-lot picks for the category include a boxer in the ring ($2,500-$3,000), touring auto with chauffeur ($1,500-$2,000) and a large greenhouse with many flowers ($1,500-$3,000).
For additional information on any lot in the sale, call 717-335-3435 or email serena@morphyauctions.com. View the fully illustrated catalog and all other auction information online www.morphyauctions.com.