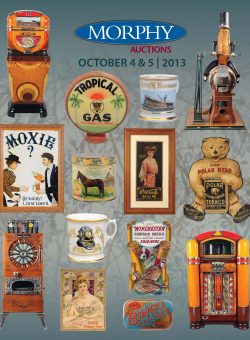 Over 140 Saving Mugs, 100 Coin-Op Including Jukeboxes and Pinball Machines, 380 Coca-Cola & Other Soda Related Lots Including the Moxie Collection of the Late Jan Miller Bacci and 300 Other Advertising Lots

Morphy’s Oct. 4-5 Premier Advertising & Coin-Op auction contains more than 1,100 top-quality lots from several high-profile collections. There are dozens of early coin-op, slot, penny arcade and pinball machines in the sale; as well as 60+ lots of superb tobacco tins from the David Hirsch collection, and one of the most comprehensive Moxie collections ever amassed, that of the late Jan Miller Bacci of Boston.

The Hirsch collection includes many of the finest known tobacco tins. “All of them are in beautiful condition, and some are believed to be the only ones of their type in existence,” said Dan Morphy, CEO of Morphy Auctions.

The late Jan Miller Bacci’s collection devoted to the soft drink Moxie was a labor of love, according to those who knew the Boston executive. “She learned about Moxie in the 1970s and began amassing what would end up being the consummate Moxie collection. It contained many great rarities and was exhibited at the National Heritage Museum in Waltham, Massachusetts. Her husband, Chuck, said she was so enamored with Moxie, she not only drank it, she also dreamed about it,” Morphy said.

Over 150 lots of soda pop advertising will be available, including many coveted, early pieces that promote Coca-Cola and its little-known offspring – Coca-Cola Chewing Gum.

Lot 458, one of the finest and earliest signs promoting Coca-Cola Chewing Gum dates to 1903 and features the elegantly dressed model Hilda Clark, who graced many Coke ads of that era. Deeply embossed on enameled cardboard, the 20 by 16in easel-back sign is embellished with gilt cabriole edging, and mauve and white chrysanthemums. “It’s the actual example shown in Petretti’s price guide, ” said Morphy. “It’s a rare find, especially in such nice condition.” Estimate: $20,000-$30,000.

Lot 459, a 1914-1916 cardboard cutout sign depicting a Dutch boy running in his clogs and clutching an oversize pack of Coca-Cola Peppermint Pepsin Gum is another Petretti book example. Vibrant and colorful, the 29 by 22in sign is described in Morphy’s catalog as “important and rare.” It is expected to make $15,000-$25,000 on auction day.

Coin-op and arcade machines will follow, with top entries including two prized Caille machines: Lot 795, a pre-1900 Puck 5-cent upright slot in working order, $18,000-$22,000; and Lot 760, a 5-cent Bullfrog upright slot, $25,000-$30,000. The selection also includes many arcade games of skill and more than 15 pinballs from the 1950s/60s. A Pace FOK slot machine is actually new/old stock and retains its original shipping crate. The coinage for this machine is the French franc, which is the same size as a US quarter. The machine left Chicago in the late 1930s, bound for Shanghai. It made it as far as Paris, but the outbreak of World War II prevented it from ever making it to China. It is estimated at $7,000-$8,000.

A large, single-owner collection of insurance advertising signs is led by Lot 1100, a reverse-on-glass sign for Niagara Fire Insurance Co., with a striking and very colorful image of Niagara Falls. Estimate: $1,000-$2,000. Among the gems in the small grouping of automotive advertising is Lot 1119, an extremely rare, circa-1920s Tropical Gas globe. A recent discovery, the globe passed by direct descent through a family that once owned a Tropical Gas station. Its auction estimate is $10,000-$15,000.

Morphy’s Oct. 4-5 Premier Advertising & Coin-Op Auction will commence at 9 a.m. Eastern Time on both days. All forms of bidding will be available, including live via the Internet through Morphy Live, Artfact and LiveAuctioneers.