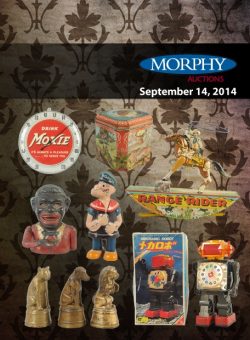 This auction consists of a nice selection of advertising items.  Included are tip trays, signs, razor items, serving trays, thermometers, Moxie items and milk bottles.
Don’t miss out on the good selection of syrup dispensers including, Orange Julep, Buckeye Root Beer, Birchola, and others.
There is also a large selection of Coca-Cola items including signs, trays, string holders, clocks and other miscellaneous items. There are a nice grouping of calendar and tins too! Pocket mirrors and several string holders will be featured including a Dutch Boy String Holder.
Red Goose advertising is plentiful and there are dye cabinets along with display cases.
Some general store tin items include coffee and tea trays, biscuit tins, store bins and a large selection of tobacco tins.
Next are a grouping of handmade and machine made marbles followed by hundreds of still banks and a few mechanical banks.  Many of the still banks are in lots of 2-10. The mechanical banks include Paddy & the Pig, Two Frogs, Humpty Dumpty, Indian Shooting Bear, Darktown Battery, Hen & Chick, Chief Big Moon, Speaking Dog, Trick Pony, Butting Ram, Punch & Judy, Artillery, Bad Accident, Boy Scout, Gem Bank, Eagle & Eaglettes, Lighthouse and others.
Cast iron toys are plentiful in this sale with Andy Gump cars, and many tin toys with Lehmann and other German tin along with Character toys and pressed steel.
There are also battery-operated toys and over 100 lots of tin wind-up toys, Japanese tin cars and Lionel hand cars.
Look for the small selection of Steiff animals and dolls followed by more pressed steel including airplanes.
Rounding out the sale are a few sports memorabilia lots and nice slag glass lamp and paintings.
The advertising, toys and tanks in this sale are quite varied and in good condition. Don’t miss your chance to own some of these great items!