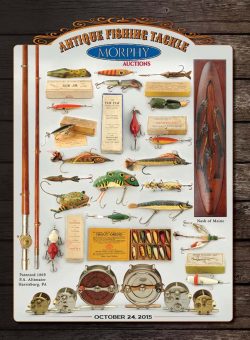 To accommodate those who would like to preview on the evening of Friday, Oct. 23, we will be extending our gallery hours until 8:00 PM.  Light refreshments will be served.

The fish will soon be biting at Morphy Auctions’ Pennsylvania gallery, with the announcement that the company has launched an Antique & Vintage Fishing Tackle, Baits & Ephemera department. Heading the newest of Morphy’s specialty divisions is Joe Stagnitti, a well-known dealer and collector who has had a committed involvement in the fishing collectibles hobby for more than 25 years.

Stagnitti will be representing Morphy’s at collector and club events around the country. Additionally, he will manage Morphy’s twice-yearly fishing tackle sales, the first of which is set for October 24 of this year.

“Joe is uniquely qualified and will do a fantastic job for us,” said Dan Morphy, founder and president of Morphy Auctions. “He knows both sides of the business, starting as a collector of antique and vintage fishing material and later transitioning into the role of dealer. He worked hard over the years to build his base of knowledge – reading old fishing magazines, studying early fishing tackle sales catalogs and speaking with ‘old timers’ and experts in the hobby. He has a photographic memory, which undoubtedly helped him to become the expert he is today.”

Stagnitti recalls that his love of fishing was instilled at an early age. “My father, who died when I was age seven, taught me two very valuable things – to play baseball and fish. I’m past the age that I can play baseball, but I sure can fish,” he said.

In 1989 Stagnitti started collecting old fishing lures and became a regular buyer at the barns, shops and showfields of Madison-Bouckville, a short distance from his home in Canastota, New York.

“To the dealers who were set up there year round, I became known as the ‘kid’ who collected fishing lures. I would pass through there a couple of times a week. If they came across any lures, they would hold them for me,” Stagnitti said.

During his first four years as a collector, Stagnitti said he thought he was the only person interested in old lures. Then he moved to the Dallas/Ft. Worth area for business, and that’s where he discovered and became a member of the NFLCC – the National Fishing Lure Collectors Club.

“Back then, it was the Wild West for fishing collectibles. There were literally no set prices, and the demand for items was so great, you could ask almost anything you wanted,” Stagnitti said. “If you had something that six people wanted, you could name your price. Lures could go as high as $50,000 and there would be four people in line for it.”

In 1996, Stagnitti, who has degrees in landscape architecture and surveying and engineering, made the leap to dealing fulltime in antique and vintage fishing tackle and lures. “Soon I was setting up at 10 shows a year and also selling via the Internet. That’s how I developed a private clientele,” he said.

Stagnitti says his goal now as a department head at Morphy’s is to “re-energize” the antique and vintage fishing tackle market, which cooled off for a period of time but is rebounding. “Any area of collecting is cyclical,” he explained, “but we’re on the upswing, now. What is really exciting is seeing that there are now some younger collectors coming into the hobby who are sons of former collectors.”

Stagnitti wants to reach enthusiasts who have been flying under the radar. “There have always been lots of unknown collectors,” he said. “I would estimate that for every member of our national club, there are at least fifty people who collect fishing tackle but who don’t go to shows or belong to any organizations. They are missing the camaraderie that collectors enjoy so much when they get together, and that’s an aspect we want to develop at each of our auctions.”

Morphy’s is now accepting quality consignments of antique and vintage fishing tackle, baits and related advertising for their Oct. 24 auction. To discuss consigning, call Dan Morphy at 717-335-3435 or email info@morphyauctions.com.