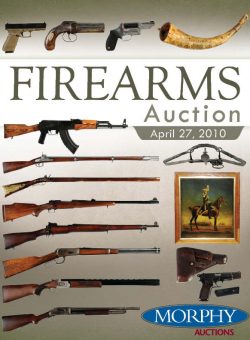 | Add to Calendar |
Facebook Twitter Email
On April 27, Dan Morphy Auctions will present a 274-lot specialty sale featuring new, used and antique firearms; edged weapons, military antiques and Civil War memorabilia.
“In our past auctions, antique and collectible firearms proved to be a highly popular category, so in response to many, many requests, we decided to add a Firearms Specialty Auction to our roster of sales,” said Morphy’s CEO Dan Morphy.
The April 27 Firearms debut will cover a long historical timeline of guns, swords, pistols, revolvers and shotguns, from Kentucky long rifles and Civil War muskets to World War I and II rifles and more-recently produced weapons. Manufacturers represented in the category include Remington, Winchester, Browning, Glock, Ruger, Beretta, L.C. Smith, Luger, Smith & Wesson, Savage, Stevens and many others. An unusual lot features a pair of circa 1750-1770 Queen Anne cannon-barreled flintlock pistols marked “Griffin” and “F” for “Foreign.”
In addition to guns, the auction will feature swords, cartridge boxes, military documents and mementos – including Civil War discharge papers, military ribbons, cartes de visite and even a U.S. Deputy Marshal’s badge.
Clothing and accessories to be auctioned include belts, pouches, spurs, hats, canteens and a uniform from The Citadel. Additionally, the sale will feature coveted Winchester advertising items.
“We’re very excited about the potential for this new series of specialty auctions,” said Morphy. “Antique and collectible firearms, and military antiques, comprise one of the world’s most popular areas of collecting. History literally unfolds before you eyes when you look at the evolution of military weaponry. We know military buffs will be extremely pleased with the selection we’ve put together for our Firearms premiere.”
All forms of bidding are available for the April 27, 2010 Specialty Firearms debut, including live in the gallery, phone, absentee and live via the Internet through Morphy Live or LiveAuctioneers.com. For information on any item in the sale, call 717-335-3435 or e-mail dan@morphyauctions.com.
Click here to view the online catalog.