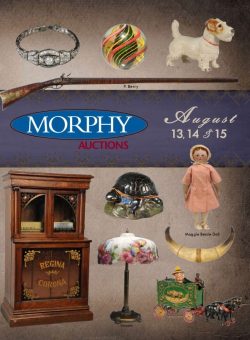 DENVER, Pa. – In terms of bidder interest, Dan Morphy’s $2.5 million Summer Auction could be described as “the shot heard ’round the world.” Anchored by the late John Holman’s collection of 220 antique Kentucky rifles and powder horns, the 3,100-lot sale held Aug. 13-15 at Morphy’s gAallery garnered media coverage in daily newspapers around the country, attracting more than 1,000 antique firearms enthusiasts to the extended presale preview.

“There wasn’t a soft category in the entire sale, but the prices realized on the guns, and the number of bidders who were chasing them, was completely astonishing to all of us,” said company owner Dan Morphy. “The guns and powder horns, alone, made more than half a million dollars.”

As had been anticipated, the top-selling firearm, at $20,700 (all prices inclusive of 15% buyer’s premium), was a 1785-1790 J.P. Beck Pennsylvania-made rifle with elaborate rococo hand carving. It previously had won a blue ribbon for “best relief carving” at the Kentucky Rifle Association’s annual convention and show.

“The success we had with this wonderful collection of antique rifles brought us another consignment of guns in short order,” said Morphy. “A gentleman who had read about the auction in the Reading Eagle brought in a very nice collection of Springfield rifles, which we will be offering in an upcoming sale.”

Mechanical music boxes from the collection of the late Rae and Hy Friedman followed the firearms and hit a high note with bidders, many of whom had known and admired the prominent collecting couple from Cleveland. A coin-operated station music box with three dolls, six bells, eight-tune capability and an automated interior picture of a barber shop flew past its $8,000-$12,000 estimate to realize $18,400.

A French interchangeable-cylinder music box with four six-tune cylinders chalked up $6,900 against an estimate of $2,000-$3,500; while an Edison Triumph cylinder music changer, Model B, with wood cygnet horn and full-round record cabinet stocked with two-minute records achieved $5,750.

Decorative art was in top form. An Arts & Crafts table made by Oscar Boch (1884-1957), a celebrated designer and metallurgist whose work adorns the exterior and interiors of many New York City landmark buildings, exceeded its estimate to make $9,000.

The timeless allure of Tiffany was put to the test with the appearance of a circa-1850 sterling silver ice bucket designed for the luxury goods company by John Chandler Moore. Shaped as a low, staved, wood-grained barrel with handles, the elegant vessel with all the right Tiffany & Co. markings sold to an Internet bidder for an above-estimate price of $4,300.

A 20-by-30-inch Haywood Hardy oil-on-canvas farm landscape featuring a horse-drawn coach displayed vivid colors and appealing subject matter. Estimated at $2,000-$3,000, it reined in a remarkable $12,650. “Fine art is a category into which Morphy’s is definitely expanding,” said Dan Morphy. “Some very exciting art consignments have arrived to us, including Pennsylvania Impressionist works, and will be highlights of future sales.”

Antique toys and dolls charmed bidders and attracted impressive prices on the auction block. A prized, all-original 1918 Maggie Bessie hand-painted cloth doll made by sisters Maggie and Bessie Pfohl of Old Salem, N.C., was expected to make $12,000-$13,000 but exceeded expectations to reach $15,500.

An 8-inch German hand-painted tin clockwork toy depicting a geisha with parasol was entered in the sale with an $800-$1,200 estimate. Competitive bidding from Europe as well as the United States pushed the well-preserved plaything to $4,900.

A total of 260 cast-iron mechanical and still banks enticed bidders in the closing session. An extremely rare mechanical Turtle bank made by Kilgore Hardware, in excellent-plus condition, was no slowpoke. It finished as top lot of the entire three-day sale, earning $64,400 against a presale estimate of $35,000-$50,000.