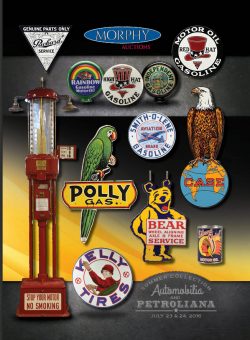 THIS HIGHLY ANTICIPATED TWO-DAY AUCTION IS THE LAST OF FOUR MORPHY’S AUCTIONS FEATURING THE NOW LEGENDARY KYLE MOORE COLLECTION. THIS AUCTION ALSO FEATURES COLLECTIONS FROM ALVIN MIELKE AND THE ESTATE OF CRAIG STATER.

Morphy Auctions is geared up to announce this 1,550-lot sale to be held on July 23rd-24th, 2016. This auction is the final Moore sale; the previous three together have produced several world records and have generated over $12.5 million to date!  All lots from this July event are on display in Morphy’s Pennsylvania auction gallery and available for preview now.

All signs suggest enthusiasts will have a hard time choosing their favorites among this sale’s remarkable assembly of breathtaking and highly desirable vintage automobilia and petroliana advertising signage.  Examples promoting national, regional, as well as long-gone brands are all available.  Several highlights will generate animal instincts among bidders.  Bird’s the word with lots #1080, a Polly Gas iconic parrot diecut sign, estimated at $60,000-90,000, and #364, a Sinclair Productos with rooster logo porcelain sign, estimated at $8,000-12,000.  Both have excellent gloss and color.  Lot #939, two diecut Bear Aligning Axle and Frame Service signs could portend a bull market with their $10,000-20,000 estimate.  And lot #336, a Mobil Pegasus Cookie Cutter sign from 1960, estimated at $4,000-6,000, is certain to take flight.

Enthusiasts are certain to get pumped up over this auction’s great offering of collectible and desirable pumps.  It makes cents that lot #122, a Starkley #C coin operated 10 gallon visible pump, is a highlight in this category.  This hard to find gas pump with a good glass cylinder has been beautifully and professionally restored.  It is estimated at $10,000-20,000.

According to Dan Matthews, Division Head of Petroliana/Automobilia at Morphy Auctions shares, “This final sale featuring the legendary Kyle Moore collection again tempts enthusiasts with some of the world’s finest gas, oil, and automobile related lenses, globes, signs, pumps, and cans.  The universal appeal of this collection is evident in the huge following these sales have generated over the past three events.   We have in part saved the best of the collection for this last event, so be prepared for some once in a lifetime collecting opportunities.  I look forward to welcoming everyone to our Denver gallery in July for this outstanding sale!”