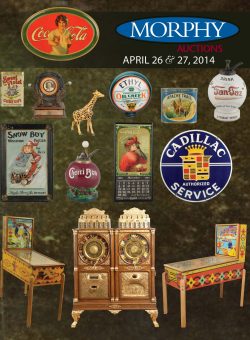 Auction Starts at 9 am both days

DENVER, Pa. – Riding on the wake of a buoyant million-dollar advertising sale in February, Morphy’s is gearing up for another wide-ranging advertising auction, with the added bonus of Part II of the David Silverman pinball collection. The April 26-27 event will feature 1,660 choice lots of antique advertising, coin-ops and figural cast-iron pieces.

Day one will open with a selection of more than 600 lots of soda pop signs and related items. Both an extremely rare 1930s Dr. Pepper porcelain triangle truck sign and a 1936 Orange Crush embossed tin sign are entered with individual estimates of $2,500-$3,500. Another scarce Orange Crush sign, made of tin over cardboard, is expected to make $3,000-$4,000. Although sampling the contents is not advisable, an extremely rare, unopened 6-pack of Dr. Pepper cone-top cans could rise to the $3,500-$5,000 range.

A 40-year single-owner collection of more than 100 early syrup dispensers features many seldom-seen types – among them, one of very few known examples of a Fan-Taz 5-cent “DRINK of the FANS” dispenser in the form of a realistically “stitched” baseball with bat motif. Made around 1900 and retaining its original pump, it carries a $30,000-$60,000 estimate.

Other top syrup dispensers include: Chero Crush, $20,000-$30,000; Cherry Chic, $12,000-$18,000; and World Liquid Force, which is shaped as a globe of the world with bas-relief continents, $14,000-$25,000. Morphy Auctions’ founder and president, Dan Morphy, noted that there are many other dispensers whose estimates are well within reach of beginning and intermediate collectors. “It’s a really beautiful collection with impressive examples at every price point. They’ve been on display here at the gallery and the compliments have been constant,” Morphy said.

Moving into the Coca-Cola category, the highest-estimated lot at $10,000-$15,000 is a large, 1930s stainless steel and neon outdoor sign made by Flexlume Electrical Advertising Co., of Buffalo, New York. Other desirable Coke signage includes a 1931 cardboard cutout easel sign with the image of a bathing beauty with sunburst parasol, $3,000-$5,000; and a 1935 shield-shape porcelain Fountain Service sign, $2,500-$3,500. From the late 19th century, an extremely rare “Hutchinson-style” bottle, with a straight-sided as opposed to cabriole shape, will be offered with a $2,500-$4,500 estimate.

The Saturday session will wrap with more than 150 lots of tobacciana. One of few known examples of a Sweet Violet Tobacco vertical pocket tin is estimated at $1,000-$2,000. A Mayo’s Plug “Cock o’ the Walk” porcelain sign features an appealing image of a crowing cockerel, while a Buster Brown cigar tin displays an amusing image of comic strip character Buster Brown and his trusty bull terrier Tighe. Each of the two lots is estimated at $2,000-$3,000.

Bidders will want to reserve as much pocket change as possible for the 200+ lots of gambling machines and coin-ops that follow. The highest-estimated item in the auction, at $100,000-$120,000, is a superb Caille double-upright floor model slot machine that combines a 5-cent Centaur and 25-cent Big Six in its gold-plated oak casing. Another handsome upright model, a Mills “Two Bits Dewey Jackpot” upright slot machine, is estimated at $25,000-$30,000. Among the most desirable snack-vending machines are a Ryede Gum, Peanut and Candy dispenser, $12,000-$15,000; and a circa-1899 Wrigley’s Gum slot machine/trade stimulator that was given to retailers if they ordered ten cases of gum, $2,500-$4,000.

This Auction includes the beginning of the dispersal of the extensive Figural Cast Iron Collection of Stephen Greenberg. Stephen, a prominent Philadelphia attorney, is a well known figure in the antique world. He and his wife were charter members of the Figural Cast Iron Club, and Stephen served as Secretary/Treasurer of the club for over 6 years.

Collected over several decades, with a focus on cast iron doorstops, the Greenberg  collection is one of the top figural cast iron collections in quality, rarity, and variety to hit the market in many years. The total disbursement of the collection will unfold over four to five auctions.

Highlights of the first auction include the highly sought after Hubley Giraffe, Bear with Honey, Happy Hooligan and the entire set of the Hubley Fish Series Figures.  This April Auction encompasses everything from cast iron lawn sprinklers, string holders, fish aquarium holders, andirons, and doorstops, to the smaller cast iron collectibles like bottle openers, card holders and doorknockers.  Also featured are a never before seen Flying Duck Doorstop, fine examples of the B and H Turkey, Squirrel and Boston Terrier, as well as the Lobster, Wine Merchant, Man on Bale of Cotton.  With over 200 items this is definitely a “something for everyone” sale, as examples range from items for the beginning collector to the advanced collector looking for the rarer and elusive pieces in almost every field of the figural cast iron market.