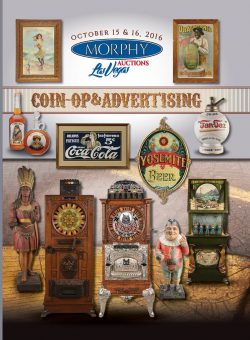 This 1,400+ lot auction follows closely on the heels of the company’s $3.5 million coin-op sale in May, 2016 and also includes a wide range of other top-tier collecting categories.
Las Vegas, Nevada, September 12, 2016 – Morphy Auctions, the finest auction destination for fresh to the market collections, is pleased to announce this can’t miss Coin-Op and Advertising two day sales event to be held on Saturday, October 15th and Sunday, October 16th, 2016 starting at 9am PST both days. All lots from this auction are on display in Morphy’s Las Vegas auction gallery and available for preview now.
Collectors will most certainly want to drop a dime on this auction’s incredible selection of almost 120 antique gaming machines. Lot #58, an exquisite 5¢ Mills Duplex floor wheel slot machine, will turn a few heads with its $100,000-150,000 estimate. Manufactured in 1899, this sexy senior citizen is detailed with a handsome oak cabinet and brass patinaed cast metal elements; up to 10 nickels can be played per pull. What collector wouldn’t want to add lot #169, a circa 1901 5¢ Caille Black Cat upright slot machine, to their meow mix? This rarity, estimated at $60,000-90,000, features a wood cabinet, detailed metal fixtures, and a charming black feline proudly displayed front and center on the wheel. Lot #167, a 5¢ Mills Lone Star slot machine is another celebrity of this event. Estimated at $40,000-60,000, this circa 1910 floor model features an oak cabinet with beautiful carved details and ornate metal furnishings. Lot #981, a c. 1898 5¢ Mills Judge upright musical slot machine, holds court with its $20,000-40,000 estimate. Made by American Canco, this upright machine has 5-5¢ gambling options with payouts on 10¢, 25¢, 50¢ and $1.00. And it’s worth a trip from anywhere to check out #922, a 5¢ Caille The Tourist counter drum. Estimated at $45,000-65,000, this circa 1912, all original machine displays the names of countries, instead of the names of cities as in the “City Reel” model.
This sale’s offering of over 90 arcade games will put bidders in a most playful mood. Lot #232, a 1¢ Mills Novelty Submarine lung tester, is breathtaking in its rarity and presentation. Created in 1910, most of these machines machines were eventually destroyed due to outbreaks in tuberculosis. It is estimated at $4,000-6,000. And its par for the course with lot #236, an English cast iron Golf Floor Model arcade machine, estimated at $10,000-20,000. This expertly restored machine rests on a matching base. Its top marquee is decorated with two golfers and an instruction plate; its cabinet interior features 6 automatons, each holding a golf club.

Let’s offer up a toast to this sale’s incredible offering of 140 lots of antique advertising and ephemeral items featuring alcohol. Lot #134, an old port back bar bottle, and lot #27, an old rum back bar bottle, are both from the 1890’s and have labels under glass featuring intoxicatingly beautiful female figures. They are estimated at $10,000-20,000 each. California is in the spotlight with lot #192, a San Francisco based Enterprise Brewing Company Yosemite Beer reverse glass saloon sign, estimated at $15,000-30,000, and lot #949, a circa 1890 California Brewing Co. reverse glass corner sign featuring a wild bear surrounded by barley, estimated at $10,000-20,000. It’s a day at the beach with lot #83, an El-Bart Dry Gin tin litho advertising sign decorated with a lovely young lady posing seductively on the shoreline. This 1906-era rarity is estimated at $20,000-40,000. And it won’t be difficult to pull the trigger on lot #191, an Old Forester Whiskey tin litho advertising sign, estimated at $20,000-30,000. It features a great image of a man holding a gun and standing next to an oversized bottle of whiskey. The sign is titled “Guarding A Good Thing In Arizona.”

This auction offers over 70 lots of truly refreshing antique soft drink advertising items. Lot #596, a circa 1918 Montelaise Cheriola syrup dispenser, and lot #597, a Drink Fan-Taz syrup dispenser, bubble to the top of the highlights in this category. Each of these clean and beautiful examples is estimated at $20,000-30,000. And it’s the real thing with lot #625, a circa 1907 cardboard Coca-Cola trolley sign. This framed piece features a cheeky young man drinking a glass of Coca-Cola and is estimated at $300-700.

There’s no match to this sale’s world-class selections of tobacco related antique advertising, with over 50 smoking lots on offer. Lot #513, a Wm. Demuth & Co. Manufacturers advertising figure from the late 19th century features a punch figure with a cigar in his mouth, one extended hand holding a bundle of cigars, and the other pointed towards his face. This piece, which retains its original fuel inlet, is believed to be the best original example of very few known, and is estimated at $100,000-200,000. And it’s hail to the Chief with two extraordinary hand carved, mid-19th century wooden cigar store Indian displays. The first, lot #511, stands tall, with one hand extended – holding a bundle of cigars – and the other held close to its body, hand in a fist. Believed to be carved by Samuel Robb, it is estimated at $100,000-300,000. And the second, lot #512, features a handsome Indian holding a bundle of “Best Quality Cigars” and looking off into the distance, one hand shading his eyes. It is estimated at $60,000-90,000.
Fine selections of vintage toys, fine antiques, general store selections, furniture, radios, and other advertising ephemera – including lot #710, a circa 1900 “Watermelon Man” lithograph for Ullathorne’s “Memphi” Watermelon Seed Company, estimated at $8,000-12,000 – round out this exciting sales event.
According to Dan Morphy, President of Morphy Auctions, “This upcoming sale is a fantastic mix of antique coin-op machines and advertising buying opportunities. Seeing these things in person is like taking a 100 year trip back in time. Our Vegas auction gallery could be a movie setting for an early 20th century arcade or casino! The 5¢ Caille Black Cat Upright Slot Machine is simply breathtaking. It would be worth a trip from anywhere to see these world-class examples – and this live event – in person.”

This print catalog is sold out.