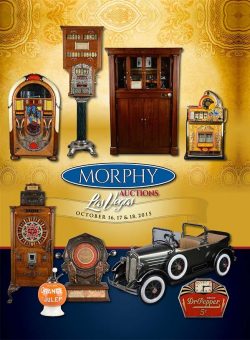 With more than 100 three-reel slot machines, 40-plus jukeboxes, and dozens of other high-quality arcade and gambling machines from the turn of the 20th century, Morphy Auctions Las Vegas� Oct. 16-18 Coin-Op & Advertising Auction is sure to be the event of the season for coin-op collectors and antique enthusiasts.

What will surely be one of the hottest items at the fall auction is a beautiful, Terry Haughawout-restored, five-cent Mills Novelty Company Violano Virtuoso. This circa-1920 self-playing piano-violin combo has been outfitted with a midi system and comes with 50 floppy disks containing music from the original Violano rolls. Always a popular item among collectors, the Mills Violano Virtuoso is expected to command $40,000-$60,000.

Another outstanding feature from the October auction is a five-cent Caille �Big Six� upright floor wheel slot machine. This expertly restored gaming console, originally released circa 1904, features the original color wheel in excellent condition, with a new top marquee and back door. The �Big Six� is estimated to sell for $25,000-$35,000.

Other highlights include a mid-century, multi-coin Wurlitzer �Peacock� Model 850 jukebox, in stunning, restored condition with keys, expected to hammer at $14,000-$18,000; a very rare, one-cent Chester-Pollard Amusement Company �Golf for Two� coin-op from the 1920s in very good condition, estimated to bring in $8,000-$12,000; and a rare, 1940s five-cent Pepsi Roulette Deepfreeze vending machine made by Bernitz Mfg and Machine Works of Kansas City and restored in Pepsi blue, which could sell for $6,000-$8,000.

The Oct. 16-18 auction will be held at Morphy�s Las Vegas gallery, located at 4520 Arville St. #1. All forms of bidding will be available, including live via the internet through Morphy Live. Start time is 9 a.m. Pacific each day. On-site previews are available 9 a.m. to 3 p.m. Monday through Friday beginning Sept. 15, or on an appointment basis by calling 702-382-2466.

All items will be on display at Morphy Auctions, Las Vegas beginning September 15th.