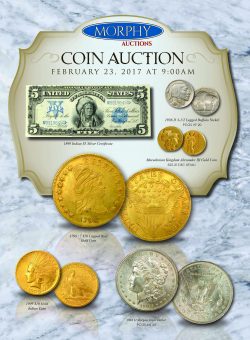 The February 23rd coin auction includes over 100 Gold coins featuring the 1798 – 8 over 7 $10 capped bust Gold coin – with only 900 ever minted. Also included in this auction are many complete sets including Indian cents, Lincoln cents, nickels, mercury head dimes, and Franklin half dollars. There is a large offering of silver dollars.

Over 60 lots of contemporary Gold including Panda’s, Russian, French, and and other countries. Most sets in original wooden boxes. USA Gold is strongly represented with over 40 lots. Nice selection of type coins and many graded coins by NGC & PCGS. Currency is highlighted by a crisp $5 Indian. There are over 200 Silver Eagles, including the Anniversary sets. There are over 800 mint and proof sets, most are 90% silver. Several platinum sets are included. the 1937 D 3 leg Buffalo and the 1936 D 3.5 leg are both graded.

Morphy Auctions is pleased to announce this can’t miss sale to be held on Thursday, February 23rd, starting at 9:00am.  All lots from this sale are on display in Morphy’s auction gallery and available for preview now.

This sale offers collectors a golden opportunity to own some of the rarest and most desirable early precious metal coins.  Lot #88, a 1798 8 over 7 $10 capped bust gold coin, estimated at $40,000-80,000, is a head-turner indeed.  This breathtaking example features a profile of Lady Liberty, nine stars to her left, four stars to her right, and a Heraldic eagle on the reverse. Only 900 of these coins were minted, making them extraordinarily hard to find.  And lot #92, a 1909 $10 gold coin featuring the bust of a proud Indian, also rises head and shoulders in this category with its $700-800 estimate.  It is graded MS 60+, has nice a luster, and a standing eagle on the reverse.

There’s also plenty of money on the line with this auction’s selections of paper currencies.  Lot #186, a pair of 1917 Jefferson $2 notes, is estimated at $200-300.  These F and F+ red sealed bills include the signatures of Speelman and White.  And lot #183, an Indian $5 silver certificate, is estimated at $1,500-2,500.  This XF/AU blue sealed example features the signatures of Elliot and White.

According to Dan Morphy, President of Morphy Auctions, “The range of coins and currencies available through this auction is truly outstanding, and offers something for collectors at every level.  Many of the modern boxed sets are really eye-catching and perfectly capture an important moment in time, like the 2000 Sydney Olympics.  However, the 1798 $10 capped bust gold coin is truly in a class by itself.  What numismatist or coin collector wouldn’t love to add this crown jewel to their collection?  We welcome you to visit our gallery in Denver, PA to view these outstanding items firsthand, or of course check them out online anytime at www.morphyauctions.com.”