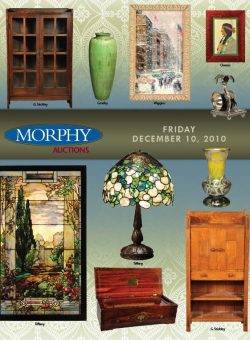 This year collectors of fine and decorative art won’t have to wait till Christmas to see their wish lists fulfilled. For the opening session of its Dec. 10-11, 2010 sale, Dan Morphy Auctions has brought together a superb selection of artworks from private collections and individual consignors that even the fussiest connoisseur would consider topnotch.
A breathtaking Tiffany Studios stained-glass window featuring a lush garden scene with trees, ivy, vines and roses adds the ultimate “wow” factor to the sale. The framed 43- by 72-inch creation, which depicts two massive columns, a winding path and an urn-topped wall, has been authenticated through expert research over a 20-year period by the premier authority on Tiffany, Dr. Egon Neustadt. Accompanied by a letter of authenticity, it is entered in the sale with a $150,000-$250,000 estimate.
In total, 20 stained-glass windows will be offered. Among them is a stunning Frank Lloyd Wright (attrib.) design that displays the genius architect’s trademark elements of linear composition enhanced by jewel-like mother of pearl details. The Wright window, which came from a residence in upstate New York, is estimated at $10,000-$20,000.
More than 30 art glass lamps will be auctioned in the Dec. 10 session. A Tiffany Studios Hydrangea lamp with a signed mock turtleback base is expected to make $85,000-$125,000.
There will be 150 paintings of various genres, including several original works by Johann Berthelsen (American, 1883-1972) and an important oil-on-board Impressionist snow scene by Colin Campbell Cooper (American, 1856-1937). Titled New York City During a Snow Storm, the signed, 15½ by 19½-inch picture was probably executed in the 1920s, and shows the influence of Childe Hassam, with its vehicles and pedestrians maneuvering through wintry conditions as American Flags fly overhead. Estimate: $20,000-$35,000.
The art pottery section includes an excellent variety of vases, jugs, vessels and tiles. The array includes 30 pieces of Roseville, 100 pieces of Grueby and additional pieces from Rookwood and other potteries. A star lot within the grouping is a 21½-inch-tall Grueby Faience floor vase with feathered Arts & Crafts glaze and two-color leaf-and-bud design. It is estimated at $10,000-$12,000.
Furniture to be auctioned includes cabinets, desks, bookcases and other forms, with 30 examples by Stickley and Limbert. A classic Gustav Stickley china cabinet with handsome original hardware could reach the $3,500-$5,000 range.
Brimming with eye appeal, the Dec. 10 session also boasts 45 figural napkin rings, 50 lots of silver, Asian ivory carvings, scrimshaw, jewelry and mechanical music boxes, with a highlight being a Nicole Freres 4-tune fat-cylinder music box, estimate $6,000-$8,000.
Three separate catalogs have been produced for Morphy’s Dec. 10-11, 2010 auction – one for the fine and decorative art session, a second exclusively for the Barbies, and a third devoted to toys, trains, advertising, shaving mugs and coin ops.