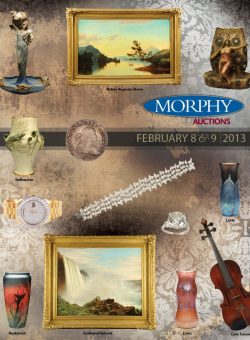 A two-day auction packed with long-held collections of fine and decorative art, plus a special featured section of valuables from Pennsylvania Treasury’s Bureau of Unclaimed Property, is on tap for Feb. 8-9 at Morphy’s. The 1,146-lot auction is the first to reflect the expert curatorial contributions of Morphy’s new fine art consultant Patrick Orbe.

The Friday, Feb. 8 session will open with Part II of a distinguished Amphora collection. More than 100 pieces of Amphora will cross the auction block, with such highlights as a monumental “Daughter of the Rhine” vase with applied jewels and enameled flowers, est. $10,000-$15,000; a ceramic Saurian and Crab vase, $7,000-$9,000; and a monumental circa-1900 blown-out portrait vase, $6,000-$8,000. Another important lot is the Paul Dachsel vase with pedicel clusters and beetles estimated at $6,000-$8,000.
“This is a high-end Amphora collection that has been privately held for many years,” said Morphy Auctions CEO Dan Morphy. “I was at the New York Pier Show a few weeks after we auctioned Part I of the collection, and the consensus was that the appearance of such a noted collection at auction had helped to rejuvenate the market for Amphora. Even after the Pier Show, we heard that same comment repeatedly, including from James Infante, the Amphora expert who cataloged the collection.”
Day one will also include several nice pieces of Rookwood, with the highlight being an Elizabeth Lincoln vellum vase decorated in a hibiscus blossom pattern, $2,500-$3,500. Twenty pieces of Czech Art Deco pottery will be offered, as well. The selection includes two rare ERPhila pitchers in the form of a goat and cat.
More than 50 lots of fine art will follow, with approximately 28 of the works coming from a single-owner Northeastern collection. Companion portraits depicting a lady and gentleman were painted around 1825 by Ammi Phillips (American, 1780-1865) and are expected to make $30,000-$50,000 jointly. Both an L. Birge Harrison (American, 1854-1929) painting “The Snowbound, Woodstock NY” and a circa-1850s mountain landscape by Albert Bierstadt (German/American, 1830-1902) carry individual estimates of $20,000-$30,000. Nelson Augustus Moore’s (American, 1824-1902) scenic “An Afternoon Boating on Lake George” was executed in 1867 and also could fetch $20,000-$30,000.
Two important still lifes are entered in the sale. A John Califano (Italian/American, 1864-1946) oil-on-canvas tabletop still life could reach $20,000-$30,000 on auction day. Similarly estimated, an 1855 school of Severin Roesen oil painting is titled “Still Life with a Bird’s Nest.”
More than 50 lots of art glass will be auctioned, including many fine pieces by noted glass makers. Among the highlights are an 8-inch Durand hanging vase, $2,000-$2,500; a Loetz Pink Luster vase, $4,000-$5,000; and a Tiffany Studios blue Favrile glass vase, $1,400-$1,800.
Next up will be a small collection of spatterware, including a 19th-century Rainbow octagonal platter, $8,000-$12,000; and an unusual collection of 20 skaters lanterns. Most of the lanterns have colored-glass globes, making them particularly desirable to collectors. A ruby-glass lantern could realize $300-$500.
The Friday session will conclude with Part II of a Breininger redware collection, which follows the sale of Part I, which was featured in Morphy’s Dec. 6-8 sale. The 80-piece grouping includes a pair of figurals, one of a reclining dog and the other of a tiger. The duo is estimated at $400-$600.
The centerpiece of Morphy’s Saturday session is a 200-lot offering of valuables entrusted to Morphy’s by the Pennsylvania Treasury’s Bureau of Unclaimed Property. The goods to be auctioned come from safe deposit boxes located throughout the Commonwealth of Pennsylvania and have been stored in the state treasury’s Finance Building vault in Harrisburg.
“All jewelry and coins within this government consignment will be sold without reserve, making these items all the more appealing to bidders,” said Dan Morphy. “This is the first live unclaimed property auction sanctioned by Pennsylvania’s Treasury in more than a decade, and since our first visit to the vaults, we’ve been astounded by the quality of the goods held there for safekeeping. Obviously, people don’t put cheap things in their safe deposit boxes.”
A stunning 14K white gold bracelet, approx. 3.4 ctw with marquise and round-cut diamonds, is estimated at $10,000-$15,000; as is a chic Art Deco-style platinum bracelet with 9 ctw diamonds – the largest being approx. .80 ct – accented by 10 small, fancy-cut rubies. An old European-cut solitaire diamond weighing 4.25 ct is flanked by two baguettes, each weighing .30 ct, in a platinum engagement ring estimated at $15,000-$20,000.
Many fine timepieces are included in the Treasury Department consignment, among them, an 18K yellow gold men’s Rolex Presidential watch with diamond-encrusted face, bezel and link band. Having an approximate weight of 8 ct, it could fetch $6,000-$10,000. Made by the popular Swiss company Breitling, a boxed circa-2006 chronograph with cobalt-blue face carries a $4,000-$5,500 estimate. Ladies’ wristwatches are led by a Baume & Mercier 14K white gold bangle-style watch with elegant diamond-framed square face. Estimate: $3,000-$4,000.
Also from the Treasury Department vaults comes a nice 60-lot selection of gold and silver coins and bullion; and platinum ingots. Coins include a 1795 draped bust silver dollar, $2,000-$3,000; a similar coin dated 1799, $2,000-$3,000; and an 1855 $3 gold piece, $3,000-$4,000.
An important item of Pennsylvania history from the Treasury Department is 1787 property deed signed by Benjamin Franklin. Estimate: $7,000-$10,000. Other items in the ephemera section of the sale include more than 100 lots of Halloween, Christmas and patriotic antique postcards from an advanced single-owner collection. Most of the lots are estimated between $300 and $500.

The sound of music will emanate from Morphy’s with a collection of 30+ phonographs, music boxes and cylinder players. In addition, a single-owner collection of violins will be on hand to entertain. A highlight is a full-size Carlo Ton Oni in playing condition, est. $10,000-$12,000. An Antonio Trestini, Naples, violin is entered with a $5,000-$7,000 estimate.