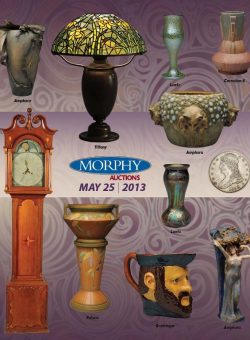 There’s nothing like a long-held, well-seasoned collection to jump-start a collecting niche that has gone quiet. Dan Morphy, CEO of Morphy Auctions, said he saw the positive effect for himself at two previous Morphy sales that included rare pieces of Amphora pottery from the renowned Les Cohen collection. He expects similar interest and continued strong results at his May 25, 2013 event. The Amphora selection set to open the company’s 750-lot Fine Art & General Antiques sale could very well make it a lucrative trifecta for consignors, Morphy said.

More than 150 pieces of Amphora – including several prized examples from the Cohen collection – lead the May 25 proceedings. Animal forms include a vase with opalescent frits and four cats’ heads in relief, est. $5,000-$8,000, and a dragon vase with realistic reptilian scaling on its convoluted tale, $7,000-$9,000.

A monumental Amphora Gres-Bijou vase in mint condition, its underside impressed with an Imperial crown and Amphora Austria mark, is very similar to an example illustrated on Page 251 of Monsters and Maidens, Collectors Edition by Byron Vreeland. It could reach $8,000-$10,000 in the May 25 sale.

Markings are especially important to Amphora collectors, Dan Morphy said. Amphora pottery was produced by the Amphora Porcelain Works from 1910 to 1945 in the Turn-Teplitz region of Bohemia, now Trnovany in the Czech Republic. Because Bohemia was part of Austro-Hungary prior to World War I, examples produced there were marked “Austria.” Pieces made after the war are identified with a “Czechoslovakia” mark.

The Amphora selection will be followed by Zeck, Rookwood and Roseville pottery. Highlights include a Rookwood umbrella stand, Roseville Futura jardinière and pedestal, and Roseville 10in Sunflower vase. All three items carry individual estimates of $1,000-$1,500. Among the 85 lots of Breininger Pennsylvania pottery are a dog with basket, $400-$800; handled pitcher, $800-$1,200; and a Santa in sleigh pulled by reindeer, $400-$800.

The auction will then move into a more general offering of fine art, clocks, Americana and even several desirable violins. The top-estimated painting, at $5,000-$10,000, is Guy Wiggins’ signed oil on board titled Midtown Winter; while the upper end of the clock section is dominated by a Black Forest Eagle clock, $5,000-$10,000 and an American tall-case clock with moon dial, $5,000-$10,000.

The Saturday, May 25 auction will commence at 9 a.m. Eastern Time. Morphy Auctions’ gallery is located at 2000 N. Reading Rd., Denver, PA 17517. All forms of bidding will be available, including live via the Internet through Morphy Live or Artfact. View the fully illustrated catalog online at www.morphyauctions.com or www.artfact.com.