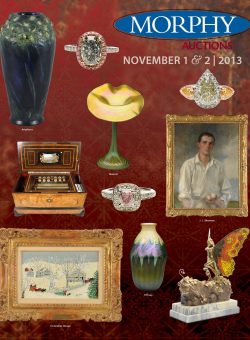 Auction Starts at  9am

A spectacular array of colored diamonds and a fresh collection of fine artworks assembled in the 1950s and ’60s top the long list of highlights in Morphy Auctions’ Nov. 1-2 Fine & Decorative Art sale. In all, 1,200 lots will be offered.

Day one will glitter with its first-class selection of jewelry, precious coins and silver, starting with 100 coin lots from the Pennsylvania Treasury’s Bureau of Unclaimed Property.

“This is our third consignment of valuables from the Commonwealth’s vaults, and the quality continues to amaze me,” said Morphy Auctions CEO Dan Morphy. “In addition to silver dollars, we’ll be auctioning 5, 10 and 20-dollar gold pieces, plus a variety of fine jewelry. This arrangement has worked out so well for both sides that the Pennsylvania Treasury has chosen to continue its arrangement with Morphy’s next year.”

Of the jewelry lots featuring GIA-certified natural-colored diamonds, several are expected to bring six-figure prices, including a 20K gold ring with a 5.16ct pear-shape fancy gray, yellow and green diamond surrounded by 26 round pink diamonds weighing 1.5 carats and 18 round blue diamonds weighing .75 carats. Morphy described the ring, estimated at 150,000-$180,000, as “a knockout.”

A number of highly regarded mid-century American artists are represented in the fine art collection to be auctioned in the Saturday session. The collection passed by direct descent through a New Jersey family and has remained intact ever since, making it a particularly fresh and desirable offering.

More than 100 paintings will cross the auction block. One of the top prizes is a Grandma Moses (American, 1860-1961) oil on board titled “First Snow,” which the consignor’s parents purchased in 1961 from Galerie St. Etienne, a New York firm that represented the artist. It retains its original artist’s label and inventory number on verso. Measuring 8in by 13in, the work is a classic Grandma Moses winter landscape, with figures, a horse and sleigh, houses, Christmas tree and a dog. It is illustrated in Otto Kallir’s 1974 reference titled “Grandma Moses” and has a presale estimate of $18,000-$22,000.

Also coming from the New Jersey collection is a 24in by 30in oil on Masonite by Theodoros Stamos (American, 1922-1997). “Stamos was a member of the art collective known as ‘the irascibles,’” said Patrick Orbe, head of Morphy’s Fine Art division. “They were really the founders of the New York abstract expressionist movement.” Titled “The Lamplighter,” the painting is signed and dated “1945 New York.” Its estimate is $15,000-$18,000.

The New Jersey collection exhibits an appealing variety of media and subject matter. There are two particularly nice pastels on paper by Joseph Stella (American, 1877-1946). The one titled “Tropical Plants” measures 18in by 24in and is estimated at $8,000-$12,000.

A formidable lineup of paintings by British artists includes a 1960 John Bratby, RA (1928-1971) oil on canvas that measures 74¾in by 26¾in and is titled “Gloria on Back and Revolving Studio.”

“The Bratby is a great one, really large and fresh,” said Orbe. “Bratby was from the Kitchen Sink Realism cultural movement in Britain (1928-1992), and the mid century was his period.” The painting is artist-signed and carries a presale estimate of $3,000-$5,000.

James Jebusa “J.J.” Shannon, RA (American/British, 1862-1923) is best known for his portraits of British and American society. A quintessential Shannon portrait in the sale – undated but probably early 20th century – depicts a handsome young man in tennis whites, clutching tennis balls in one hand. The 36in by 28in oil on canvas has an impressionist feel that is typical of Shannon’s work. It is signed at lower left and expected to make $15,000-$18,000.

A great example of mid-century American illustration, Earl Moran’s (1893-1923) pastel on paper is the original artwork for a pinup calendar published by Brown & Bigelow, a promotional products distributor that has been in business for well over a century. The 26in by 20in pastel is absolutely fresh to the market. It has clear provenance with paperwork from the owner and has been in the same collection since it was first painted. Estimate: $8,000-$12,000.

Bermuda scenes have their own small but dedicated following. A marvelous example of a Bermuda cottage with picket fence and tropical greenery, painted by Edith Sarah Watson (American, 1861-1943), is expected to capture the attention of those particular collectors. It measures 12in by 16in and is estimated at $1,000-$1,500.

The auction also includes a varied selection of regional art, including a Florida scene by Rachel V. Hartley (1884-1995, granddaughter of George Inness and daughter of sculptor Jonathan Hartley), a James Milton Sessions (American, 1882-1962) watercolor of the Mississippi River, and a group of oil paintings by Native-American artist Louis ShipShee (1896-1975).

The decorative art section includes some unusual and very beautiful pieces, such as a circa-1905 metamorphic brass and marble butterfly by Carl Kauba (Austrian, 1865-1922). A quintessential example of Art Nouveau artistry, the butterfly slowly opens its filigreed, translucent enamel wings to reveal a nude woman when its antenna is pressed. Estimate: $15,000-$20,000.

A grouping of 20+ stained glass windows includes a double-hung, stained- and leaded-glass window commissioned around 1897 by a man named George Crane – perhaps explaining its crane motif. The window came from an old house on West Main Street in Mountville, Pa., Morphy said.

More than 100 art glass lots have been cataloged, including a 15in Quezal Jack-in-the-Pulpit vase with a large oval head in stunning gold luster. The circa-1915 vase carries a presale estimate of $12,500-$15,000. The unmistakable quality of Tiffany is seen in an 8in, circa-1900 Blue Nash vase with pulled-feather decoration and strong purple and yellow colors. Estimate: $5,000-$7,000.

Amphora collectors would be pleased to know that Morphy’s will be offering a 50-piece grouping that includes a monumental 20in Fates vase with 100 Art Nouveau faces modeled into the design. In mint condition, it is estimated at $15,000-$25,000. A 25in Amphora Stellmacher Frog and Fly vase could achieve $5,000-$7,000.

Both sessions of the Nov. 1-2 auction will commence at 9 a.m. Eastern Time. All forms of bidding will be available. Preview the online catalog and sign up to bid absentee or live online during the auction through MorphyLive, accessible through www.morphyauctions.com, Artfact.com or LiveAuctioneers.com.