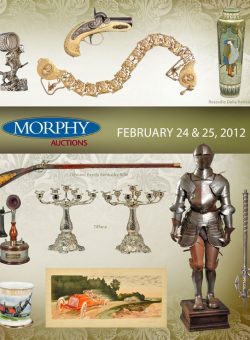 Some say chivalry is dead, but Dan Morphy says “Nay, verily.” Morphy’s central Pennsylvania auction gallery will soon be the setting for an auction of antique helmets, swords and other metal weaponry that even Sir Lancelot might be tempted to bid on. The 40-lot grouping ofarmor is one of several collections featured in Morphy’s Feb. 24-25 General Antiques auction, along with Tiffany silver, early telephones, antique American firearms, pottery,  jewelry andwatches.
Day one of Morphy’s 1,350-lot auction – a Friday session – will open with 150 occupationalshaving mugs from the 19th and early 20th centuries. Among the top lots in this grouping are mugs with images of a railway steam shovel, estimate $2,000-$2,500; and a fire truck with the word “Liberty,” est. $1,000-$1,500. A particularly rare mug has a photographic image of its owner, identified as “W.I. Xander.” Est. $1,000-$1,500.
The 100 automobilia lots to follow include a number of early 20th-century French posters, as well as Royal Doulton and Nippon pottery with motoring themes. There are six pieces ofRoseville in a pattern featuring touring cars, with a jardinière estimated at $2,000-$3,000; and a flared vase, $1,500-$2,500.
An additional 100 lots of general pottery feature Roseville, Rookwood and Weller. Highlights include an eight-color Roseville Della Robbia vase designed by Frederick Hurten Rhead (1880-1942), $10,000-$15,000; and a Weller Louwelsa American Indian portrait vase, signed “A. Williams” and estimated at $3,000-$3,500.
An extensive selection of fine jewelry has been cataloged, with top lots led by a highly decorative 14K gold bridal belt, circa 1920s and weighing 578 grams, est. $20,000-$30,000. A trove of bracelets, necklaces, pendants and rings of very high gold content will be offered, including a heavy “statement” pendant with a lion’s-head motif that is expected to make $2,800-$4,000. Weighing 171 grams, an 18K gold enameled ladies’ compact carries an estimate of $7,000-$9,000.
From the private vault collection of retired Florida jewelers comes an array of finewristwatches by prestigious Swiss watchmakers. Patek Philippe, Juvenia and Rolex models from the 1930s through 1950s are included, as are numerous pocket watches and several 18K gold repeaters with individual estimates of $2,500-$3,500.
The Saturday session will begin with Part II of the late Bill Daniels’ collection of antique and vintage telephones. Highlights from the more than 200 lots to be auctioned include a circa-1878 Charles Williams “coffin” telephone, $5,000-$10,000; an 1895 Western Electric foldingvanity telephone, $3,000-$4,000; and a circa-1904 pay station phone that operates on silver dollars, $5,000-$7,000. The collection also includes telephone-related porcelain signs and other great advertising pieces.
The featured collection of antique armor was amassed over a period of 50+ years by renowned Hollywood animator and film director Frank Andrina. The most imposing item in the collection is a suit of full standing armor, with most of its composite pieces dating to around 1560. Standing approximately 75 inches tall, the suit is in very good to excellent condition. It is expected to sell in the $30,000-$50,000 range.
A favorite sword in the Andrina collection is a circa-1580 German production with flambé blade and deeply stamped haft. One side of the handle is marked “SDIOSDI,” while the other bears the sacred “IHS” monogram. The 75-inch-long sword could fetch $10,000-$15,000.
Constructed entirely of hand-forged steel, a circa-16th-century mace incorporates six unusual arrowhead-spiked flanges. Each flange features the touch mark of a shield with cross and the initials “H.K.” Nicely laminated throughout, it carries an estimate of $4,000-$8,000.
Yet another leading lot is a circa-1630 Italian or German Savoyard-style helmet with two-piece skull, low comb and two-piece visor. The helmet retains the majority of its blackened finish and displays two small period restorations. Estimate: $4,000-$8,000.
From armor and swords, the sale moves into a grouping of 100+ vintage firearms, including more than a dozen prized Kentucky rifles.
“The highlight is definitely the early (1st/2nd quarter) 19th-century Leonard Reedy rifle that passed through descent in the family of the original owner,” said Morphy Auctions CEO Dan Morphy. “It’s a very rare and desirable Pennsylvania gun, and although we’ve estimated it at $20,000 to $40,000, our antique firearms expert, Steve Hench, said it would not surprise him if it sold for $50,000 or more.”
The rifle showcases the very best of Reedy’s workmanship, according to an extensive catalog description written by Hench. He writes: “The brass patchbox with its nine piercings may be considered his finest design; obviously it was a costly undertaking. The patchbox engraving, while typically light in depth, is highly visible on the mellowed, oxidized brass, and inside the patchbox cavity, there is still some of the tallow-beeswax used for greasing the patches that encase the lead balls… The rifle stock’s relief carving is almost as crisp as the day it was done.”
In addition to the Kentucky rifles, Morphy’s Feb. 24-25 sale includes a nice selection ofSpringfield bolt-action rifles, a Colt Lightning Model 1877 with original papers, est. $7,500-$15,000; and a Philadelphia Derringer with ivory grip, est. $3,500-$5,000. Additionally, there are numerous other shotguns, muskets and pistols; as well as more-contemporary entries.
The session continues with several lots of folk art, led by two circa-1870s Brubaker carved wood horses, $10,000-$15,000 pr.; a five-color stoneware water cooler with a Niagara Fallsscene, $4,000-$6,000; and more than 100 figural napkin rings. Designs include Kate Greenaway designs – two girls on ladder, and lady on toboggan.