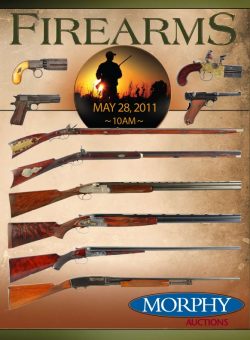 THE FIREARM COLLECTION OF RON G. GABEL | Part 1 (Lots 65-110)
Pistols: Constable, Krider, Robertson, Lechler, Kunz, &  Spang Wallace.
Shotguns: Kaye, Space & Wallace, Solomon, Krider, Biddle, Vallee, Anschutz, Evans, Conrad & Walton, Keyser & Gelzer.
Half Stock Rifles & Single Barrel Shotguns:Hallowell & Meyers, Lower, Koons, Golcher, Slotter & Co., Krider, Anschutz, Kilpatrick, Kaye, J. Wurfflein, Solomon, Afflerbach, Calderwood, A. Wurfflein & Robertson.
This auction includes an assemblage of muzzle-loading sporting guns and rifles by the largest variety of Philadelphia gun maker’s ever offered in public auction. In a number of instances, pieces offered are the only example located in over 50 years of collecting. Many pieces are in fine to excellent condition, while others, which represent the only known example to survive, are in as-found average condition.
Although many European gunsmiths passed through Philadelphia because it was a seaport city and the largest city in the country in early years, almost all of them moved on to set up shop outside the city. Philadelphia was ringed by forts for security and food was brought in by traders. Only in the second half of the 19th century as shoot clubs, hunting, and sport shooting become popular, did the number of Philadelphia gunsmiths multiply. At that time, their products were among the best of those offered in this country. These guns are just beginning to attract great numbers of serious collectors. As more books are written these guns are sure to be great investments, as are all other antique weapons produced earlier in this country.
—
STEPHEN D. HENCH
Comments from the Cataloguer
Because Philadelphia was America’s major producer of sporting firearms in the first half of the 19th Century and was universally recognized as such. It is quite unlikely that a sale of antique firearms of this specific origin will occur again as no one in the past collected guns of this particular origin. This particular sale is the first of two sales (second in the fall of 2011) of Ron Gabel’s Collection of signed or marked Philadelphia guns. Ron is a nationally known figure in the world of antique arms collecting, and he has spent many, many years putting together this fine assemblage of pieces. This collection consists of signed pistols, half-stock rifles, and both single and double barrel shotguns – all of which are Philadelphia marked. All of these guns will be featured in Ron’s forthcoming book on Philadelphia Gunsmiths of the 19th Century.
One of the greatest assets to this collection is its condition status. All of these items range from good to excellent, condition-wise, without significant repairs or restorations. Condition can play a very important part in value in today’s antique-arms collecting world, as prices tend to be the very strongest for articles without major flaws or imperfections. Over the many years Ron has studiously sought out items in good, or better, condition to fill out the collection. In simple words, Ron has “cherry-picked” the various venues, such a shows, auctions, and private collections to assemble this grouping, always factoring in the condition of an item. It is important to note that this sale will allow buyers to get in on the “ground floor”, so to speak, as the full value of these singular pieces have not yet reached their peak. Today, many firearms and their related accouterments may sell in the tens of thousands of dollars, whereas all of these guns are conservatively estimated at a fraction of those prices.
This sale is completely UNRESERVED; therefore, many auctions lots may well start at their low estimate. This collection has never been an “accumulation” – but, instead developed as a “collection” that has character and strength behind it.
Opportunity — this is exactly what this first offering of Ron Gabel’s Philadelphia collection will offer to the prospective buyers. So, a word of advice, choose your items as carefully as Ron did when he assembled this collection!