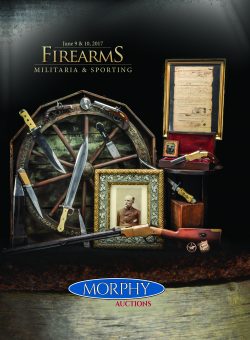 Morphy Auctions June, 2017 Firearms Auction to Include Over 1,100 Lots of Guns, Knives, Swords, and Other Militaria, Including Numerous Museum Quality Examples and Rarities.

Morphy Auctions’ June 9th-10th, 2017 Firearms Sales Event promises to be the company’s highest grossing firearms auction to date. The bidding starts promptly at 9:00 AM each day. All lots from this event are on display in Morphy’s Denver auction gallery and available for preview now.

Highlights include a presentation Winchester Henry rifle given to Wells Fargo detective James Hume, the man responsible for bringing in the notorious Black Bart.  Also on offer are several volumes of related provenance and his original gold badges.  Another important rifle is an exquisite silver-mounted Daniel Searles of Baton Rouge, inscribed and given to Robert Anderson, commander at Fort Sumter.  It features gold and platinum bands around the breech and muzzle.

This sale presents a number of important Bowie Family items that include provenance from direct descendants. These include a miniature portrait on ivory of Rezin Pleasant Bowie and his own personal silver-mounted rifle by Bartlett and inlaid with a large silver alligator on the buttstock.

Over 30 of the best-known Bowie knives in existence, including the largest known “Improved Pattern” Schively along with seven others, are certain to catch the eye of enthusiasts.  Many examples are from world renowned collections and have been extensively studied and documented.  Other examples include the finest known Samuel Bell signed silver mounted Bowie knife and four others by Bell.  Also of interest are a massive coffin-handle Bowie knife by Dufilho of New Orleans, a ring-guard Bowie knife by Lassarie of New Orleans, and several fine and scarce English examples.

This sale also features a fine collection of Southern made and retailed Deringers and rifles, including a silver and gold mounted Searles-made Deringer presented to Stephen Henderson who was the recipient of one of the original Searles Bowie knives.  Other examples include a fine and large pair of Deringer pistols by Libeau of New Orleans, a silver and gold-mounted Deringer retailed by Hyde & Goodrich, a scarce American dueling pistol by Searles & Fitzpatrick, and several other important pistols.  We are also pleased to offer an ornate silver and gold mounted rifle by Fitzpatrick, who was another important and early Bowie knife maker.

With well over 100 swords spanning all time periods and countries, there is something for every edged weapon collector.  Highlights include a 1st Model Virginia Manufactory Cavalry saber, several Scottish basket hilts, fine eagle hilts, and a well-known and rare Napoleonic Prince of Wales presentation sword.  Other accessories offered include a large collection of powder flasks and powder horns.  One of the most significant horns is engraved with a depiction of Fort Ontario and dates from the French and Indian War.  There is also a variety of uniforms, helmets and headgear from many different countries and periods of history.

The offering of deluxe and high grade Winchesters is impressive and the company’s largest to date.  There is a special one-of-a-kind nickel plated Broomhandle Mauser given by Kaiser Wilhelm to Captain Von Luckner, World War I’s most decorated German Naval hero.

We have a Napolese Bira Gatling gun, our usual high condition assortment of Colt 1911s and Luger pistols, and a vast offering of both military and Wild West-era memorabilia.  There is also three of the earliest boxed Colt Pythons – one in factory nickel, a fine selection of London doubles with several early and unique examples, a large collection of 19th century Smith & Wesson revolvers including a Wells Fargo, numerous pre-war boxed Colt revolvers, a fine collection of early high grade Mannlicher Schoenauer sporting rifles, and a nice collection of Colt automatics.

Millions of tourists swarm the state of Pennsylvania in early June; we hope you can make it fit into your summer plans.  Our auction gallery is an ideal destination to attend a world class offering of antique weapons combined with history and antique shopping in our beautiful Pennsylvania setting.  Internet pre-bidding is available at www.morphyauctions.com.