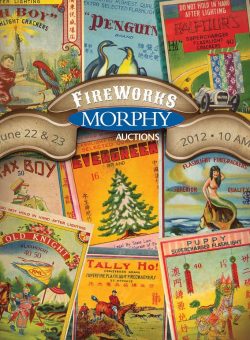 | Add to Calendar |
Facebook Twitter Email
Auction-room fireworks expected at Morphy’s June 22-23 auction of George Moyer collection
40-year collection includes spectacular array of vintage firecrackers, pyrotechnic rarities
Fourth of July celebrations will begin early this year, with Morphy’s June 22-23 auction of the spectacular George Moyer collection of antique and vintage firecrackers.
Known and revered by “pyromaniacs” throughout the United States and abroad, Moyer’s 40-year collection consists of thousands of rare firecracker packs and label, salutes, consumer novelties, sparklers, caps and smaller tubed items. Additionally, there are posters, catalogs and salesmen’s sample boards, which were created to display products available to retailers in days gone by. One such catalog was published in the 19th century by Rochester Firework Co.
The entire, unpicked collection will be apportioned into more than 1,300 colorful lots, some containing multiple pieces. While the main focus of the collection is American-made fireworks, there are also items from England, India and Canada.
Moyer, who is a native and lifelong resident of Pottsville, Pa., owns an amusement machine company. “I made my fun my work,” he said with a laugh.
Moyer began collecting fireworks-related items at age 10. “I spotted a label on a pack where some boys were shooting off firecrackers. I picked it up and thought it was neat, so I started picking up more labels the same way, looking for them where kids were shooting them off,” he said.
In the early 1970s when Moyer acquired his first pack, there were no organized groups of collectors or publications devoted to the hobby. Collectors found each other through ads or would run into each other at general antique shows or toy shows, he said.
“Eventually we formed a little trading group, but it wasn’t till much later that there were collector club conventions,” said Moyer. “I would find things at antique shops, paper shows, through antique dealers, all sorts of methods. At yard sales I would always ask if they had any old firecrackers for sale. Of course, once the Internet became available, it opened up the whole hobby.”
Moyer’s interest in fireworks never waned. After completing high school and a stint in the military, he hooked up with a friend who had a professional fireworks company in New Jersey. Over the years, he has maintained his association with the company and is a licensed pyrotechnician who can legally set off fireworks at public events. “To this day, I still fire them off,” Moyer said.
Some of the earliest items contained in the Moyer collection are Chinese black-powder (gunpowder) firecrackers from the early 1800s. They are identifiable from their distinctive red labels with gold print. Black-powder firecrackers were phased out when flash crackers – which “blew up better” – were introduced, Moyer said.
The Moyer collection contains scores of rare labels that are sure to appeal to collectors. “I have many things in my collection that I believe most of my fellow collectors don’t even know exist,” said Moyer, who included selections from his personal stash in the beautiful full-color reference book he co-authored in 2000: Firecrackers – The Art & History.
Among the rare packs and labels to be auctioned are titles including: Evergreen, Merry Go Round, Puppy, Ostrich, Gee Whiz, Marine Brand, Battleship, Fountain Brand and Tarzan. Especially appealing graphics are seen on Unexcelled Fireworks’ “Jester,” which depicts a court jester, “Round One,” whose label is illustrated with a gloved woman boxer seated in the corner of a boxing ring, and “Tally Ho,” which shows a horse jumper with dog running alongside. Two Canadian highlights are “Ibex” (black powder), with the image of a mountain goat; and “Niagara,” which, as the name suggests, features an image of Niagara Falls.
Two other packs that are worthy of note are “Red Fox” and “Squirrel,” both manufactured by Wilfong Fireworks. Wilfong was a Texas company that made headlines in the early 1950s when its plant exploded and emitted a mushroom cloud that some locals mistook for an atomic bomb attack by the Soviets.
The collection includes three different types of Ft. McHenry salute boxes and a special display of firecrackers encased in glass so their distinctive wrapper designs are visible. A very rare and desirable box of Buck Rogers Disintegrators (salutes) is expected to attract crossover interest from space toy collectors. Its box cover is dominated by an illustration of the famous sci-fi hero brandishing a ray gun.
Moyer said his fellow collectors are going to be “very surprised” when they see one particular novelty slated for auction – a merry-go-round that, when lit and put into motion, spins around and concludes its performance with crackers firing off. Made by M. Backes & Sons of Wallingford, Ct., it is unused and in its original box – a rarity, said Moyer, because any fireworks item is “meant to be shot off; then it’s done.”
Morphy Auctions CEO Dan Morphy said catalog orders have been pouring in and that he expects a strong turnout of enthusiastic bidders for the June 22-23 auction.
“George Moyer is the world’s foremost collector of fireworks. He’s highly respected in the hobby,” Morphy said. “I’m sure bidders are going to go all out to try to win rare pieces from this remarkable 40-year collection, which is being offered at auction complete and unpicked. It’s one of a kind.”
Both the June 22 and 23 auction sessions will commence at 10 a.m. Eastern Time. All forms of bidding will be available, including live via the Internet through Morphy Live or LiveAuctioneers.com. Note: Special conditions apply regarding the shipment of fireworks, which may not be sent through the US Postal Service.