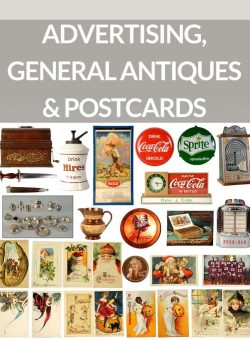 AUCTION STARTS AT 9am

Over 25 lots of sterling silver, over 150 general antique lots, over 380 lots of advertising and much more.

Morphy’s August 20th auction features a stellar postcard collection of over 200 lots which is vast and covers nearly every category of postcards. There are several hundred Halloween cards by Tuck, Winsch, International Art and many other publishers. One highlight is a card by Ellen Clapsaddle that depicts an African American boy dressed as a ghost holding a pumpkin head. His arm can be moved to cover and uncover his face with the pumpkin. If you are a Christmas fanatic then don’t miss the thousands of Christmas postcards as well, many featuring Santa.

Some specialty cards include hold-to-mirror, mechanical, open-ups, leather, real hair and just about every category imaginable. Check out the online catalog for more fantastic postcards! www.morphyauctions.com

The August 20th General sale consists of a nice grouping of Coca-Cola advertising with trays, signs, bottles, toys and neon’s. The Coke is followed by beer trays and general advertising with many figural display items.

This sale has variety of country store items ranging from scales, spool cabinets to store display items. There are even some lots for coin-op collectors including gumball machines, trade stimulators and wall boxes for juke boxes.

Finally, the sale rounds out with a massive postcard collection with many lots of 200-1000 cards per lot. A great assortment of real photo postcards, Black Americana, Santa’s, Halloween, Hold to Light cards, mechanical cards which include: Tuck, Schumaker, Winsch and sports postcards. There are also transportation, bridges, military and miscellaneous postcards. This is a real opportunity for postcard collectors! Visit the online catalog for details.