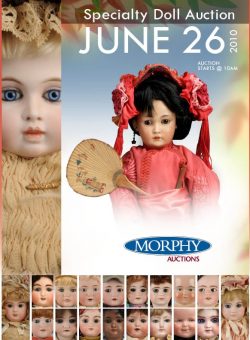 The majority of this sale features the extensive collections of two long-time collectors. One of the collections featured is the impressive collection of Sunny & Louis Reyes of Washington, DC, both now deceased. Their collection of dolls filled every room of their home. Just looking at the way they were displayed and dressed, it was easy to see that these dolls were owned by someone who really enjoyed collecting. Sunny loved all antique bisque dolls, but the French Bébés were her favorites. She was very partial to large dolls, and had them arranged in vignettes, many around tables having tea parties. The smaller dolls were in cabinets that lined the walls of all the rooms and hallways. Sonny wanted her dolls well-attired, and most are dressed in custom-made French-style outfits with hats framing their faces. Louis was interested in the American Indian culture. He was known for the denim jackets with Indian motifs that he made. He collected American Indian items, including silver and turquoise jewelry and paintings. He and Sunny had beautiful American Indian costumes in leather and suede custom made for many of their German bisque dolls. Sunny & Louis were well-recognized collectors and familiar faces at the Gaithersburg Doll Show, which they faithfully attended 4-times a year. They will be missed by their many friends.
The other fine collection of dolls in this sale were assembled over a 30-year period by a couple from the northern New England area. Their dolls were purchased primarily from the mid 1970s until 2000. Most were obtained from local auctions, private sources, and well-known old time New England doll dealers. The husband would clean and restring the dolls, and the wife made most of the lovely dresses and hats for these dolls from beautiful vintage fabrics. The amount of time put into creating each costume is amazing. In purchasing them you are not only buying a fine antique doll, but also purchasing a one-of-a-kind outfit.