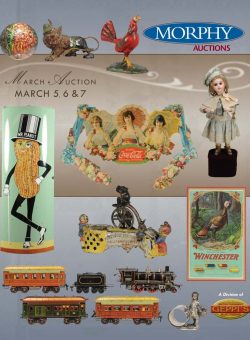 | Add to Calendar |
Facebook Twitter Email
Morphy’s first sale of 2009 tops $1.4M and confirms strength in the collecting market
To toy collectors, ‘Marklin’ was the magic word
DENVER, Pa. – A full house and a noticeable influx of new bidders contributed to a grand total in excess of $1.4 million in Morphy Auctions’ March 5-7 Early Spring Sale. Bidding-card registrations indicated that, over the three-day period, more than 750 people attended the event in person.
“We were very pleased with the turnout,” said Morphy’s chief operating officer Dan Morphy. “On the Thursday there were more than 200 people in the gallery, which is an excellent turnout for a weekday. All of the Planters Peanut collectors were here because of the Van Benedick collection, and some of them had traveled long distances from the Southern states. It was one of the strongest preview attendances we’ve ever seen here in our gallery.”
Train and marble collectors also showed up in force, Morphy said. “I think everyone was ready for a good sale to reinforce what is becoming increasingly clear – that the collecting hobby is its own micro-economy, and it remains buoyant regardless of any negative news coming from Wall Street.”
The top lot of the sale was a Marklin 2-gauge F&E live steam passenger train with hand-painted details and enameled finish. One of the premier German toy manufacturer’s finest trains, it featured an engine, tender, and baggage, passenger and dining cars, and sold within estimate for $32,200 (all prices quoted inclusive of 15 percent buyer’s premium). Another popular entry was the green Lionel No. 381E standard-gauge Colorado state set that realized $17,550 against a $10,000-$15,000 estimate.
It was clear sailing for the Marklin brand in the nautical section, as well. A magnificent 28-inch-long painted-tin clockwork battleship replicating the Wilmington, with two original masts, two original booms, six lifeboats and six sets of guns dropped anchor at $26,450, well above its $14,000-$18,000 estimate.
The number of collectors pursuing marbles only seems to increase with each sale, according to Morphy. “Marbles are hot, period,” he said. “They’re small and easy to display, and each is an individual work of art. There seems to be strength at all price points in this category. The bidders were there across the board – low, medium and high levels – and it’s a very positive sign that there were around 10 major new players at the top end.”
In the March sale, the priciest of the marbles was an extremely rare 4-panel onionskin type with suspended bits of mica creating a “blizzard” effect. “It was a beautiful example of the most advanced level of marble workmanship, and fully justified its $9,775 selling price,” Morphy said.
Among the tinplate character toys, a circa-1925 “Skidoodle” wind-up fared best. The colorful, German-made lithographed-tin auto with comic-character-type passengers was designed by Louis G. Ferstadt, a Russian-born artist who briefly dabbled in toys prior to becoming an acclaimed comic book artist. Estimated at $2,000-$3,000, the Skidoodle changed hands for $6,325.
In the advertising portion of the sale, Mr. Peanut led the parade of prices, with a vertical half-moon porcelain sign originally displayed in the 1930s/’40s in a Planters store in Memphis, Tenn., hammering a within-estimate price of $16,100.
Other noteworthy advertising lots included a circa-1909 framed 23-inch by 40-inch Winchester Cartridges sign featuring a wild turkey, which hit the bull’s eye at $10,350; and a 1936 Coca-Cola 50th Anniversary cardboard poster depicting two bathing beauties – from 1886 and 1936 respectively – that knocked down a refreshing $4,312.
Favorites among the metal novelties included a cast-iron doorstop replicating Clark House in Salem, Mass., which realized five times its high estimate at $4,887; and a 6-inch-long Pine Cone still bank of painted lead, which sold for $1,725.
Other lots garnering high interest in their own particular categories included a 1910 folk art Victrola of carved wood with floral and reptilian decoration, $5,750; and a very rare 14-inch Lenci girl doll made in 1926 as part of the manufacturer’s 400 series. With a molded head and painted-on features, the impeccably dressed and hatted doll, complete with organdy undergarments, stockings and leather shoes, was bid to $2,185.
Morphy’s next auction, which will be held May 28-30, features a number of fine private collections covering a variety of categories such as gum machines, early shaving mugs, antique paper dolls and European art glass. For additional information, log on to www.morphyauctions.com or call 717-335-3435.