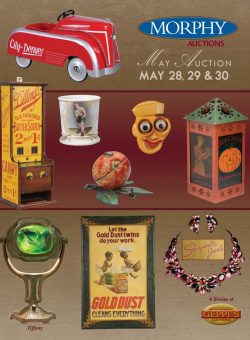 | Add to Calendar |
Facebook Twitter Email
Midrange heats up, high end goes higher in Dan Morphy Auctions’
$1.3 million sale held May 28-30
DENVER, Pa. – While the finest examples in each category brought predictably high prices, it was the reawakening of the middle range that spurred the most discussion at Dan Morphy Auctions’ $1.3 million Spring Sale. The May 28-30 event showed strength at all levels, said auction company owner Dan Morphy, even in areas that had cooled in recent months.
“I was talking to our antique advertising specialist Gary Metz, and with Don Heim, who’s an extremely knowledgeable dealer/collector, and we all agreed that a lot of the middle to high-range material brought very good prices,” said Morphy. “Some of the hand-painted German tin toys were only graded 6.5, but they had a fantastic following and sold for excellent prices. There was a collection of toy snails that contained a Lehmann production that a lot of German collectors wanted. It sold for $3,700 (15% buyer’s premium included), which was just amazing.”
Pressed-steel toys, which seemed to have slowed down in the marketplace, showed plenty of muscle in the sale’s Friday session. “Some collectors had said that there was too much pressed steel on the market and that it had gone soft, but that’s not what we saw. We had more than 100 people in the audience for the pressed-steel and pedal-car portion of the sale,” Morphy said. “Some of them had driven long distances, from Wisconsin and Missouri, and some pulled up with trailers. The person who bought the most pressed steel was still packing up his purchases on Saturday morning.”
The top pedal-car lot among the 175 examples offered from a single-owner collection was a slick 1930s Cadillac tandem model made by American National of Toledo, Ohio. Sporting a rumble seat for additional passenger, the impeccably restored 40-inch-long luxury car breezed past its $1,000-$1,200 estimate to apply the brakes at $9,360.
Toys with an animal theme proved very popular. In addition to the aforementioned snails, the single-owner collection included turtles, fish, snakes and frogs. A papier-mache ball-toss amusement game comprised of a 19-inch-tall open-mouthed frog on a wheeled platform, complete with painted-wood balls, easily surpassed its $2,000-$4,000 estimate to settle at $6,300.
Kyser & Rex was the brand of choice in the cast-iron banks category. A still bank shaped like an apple on a branch, in near-mint-plus condition, took a bite out of its $1,500-$2,000 estimate, closing at $3,200 – a record auction price for the form. An Internet bidder prevailed on the Kyser & Rex Organ Grinder and Bear mechanical bank, which sold together with its original box for an above-estimate price of $4,800.
The acclaimed antique paper doll collection of the late Phyllis Grindle drew collector attention from all corners of the United States and Europe. Leading the approximately 200 lots in this specialty grouping was an extremely rare circa-1850s boxed set known as “The Boy & His Horse.” With four reversible mounts and six interchangeable riders, the coveted set in near-mint condition realized $4,600 against an estimate of $2,500-$3,000. In the doll section, a Schmitt et Fils 12-inch bébé with closed mouth and blue paperweight eyes fared best, also making $4,600.
Antique advertising put in a powerful performance, with an extremely rare Dilling’s Old Fashioned Butter Scotch penny vending machine topping the group. Featuring bright red and yellow advertising on its front and porcelain sides, and marked with an 1899 patent, the machine produced the goods at $15,500 against hopes of $6,000-$9,000.
Bidding on an extremely colorful, oak-framed cardboard Union Leader Cut Plug Tobacco sign issued in 1899 was competitive to the end. “We had five phone bidders after the piece,” said Morphy. The winner paid $4,600.
A pre-1900 reverse-on-glass oval corner sign advertising beer, porter and ale from America’s oldest brewery, Yuengling’s of Pottsville, Pa., included its original fluted metal framework, trim and wood corner bracket. It bubbled up a winning bid of $6,600.
Halloween collectors entered the advertising arena to vie for a particularly appealing None Such Mincemeat lantern. Decorated with images of a jack-o-lantern, American Flag and the None Such Soup Lady, it retained its original insert that can be turned to reflect light. Estimated at $2,000-$3,000, it was a treat without the tricks at $5,200.
A special highlight of the sale was the 60-piece Bob Miller occupational shaving mug collection. The highest-achieving entry was the boxing-themed personal shaving mug of Charles Hitte, a celebrated turn of the 20th century pugilist from Albany, N.Y., who died tragically in 1905 after becoming involved in an argument outside a hotel. The Hitte shaving mug sold within its estimate range for a solid $7,500.
European bidders were especially active in the sale via the Internet, Morphy said. “Virtually all of the German bidders for the toys were online. In all, we had more than 1,000 registered Internet bidders. In addition, we had 1,450 absentee bids through our Web site, which is the most we had ever recorded for a sale.”
Dan Morphy Auctions will conduct its Summer Sale at the Adamstown Antique Gallery in Denver (Adamstown), Pa., Aug. 13-15, 2009. Details will appear soon on Dan Morphy Auctions’ Web site at www.morphyauctions.com. For additional information, call 717-335-3435 or e-mail dan@morphyauctions.com.