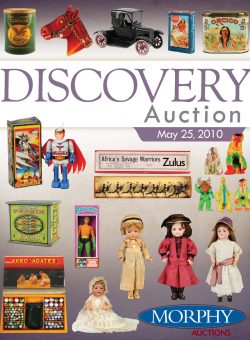 Two collections of fine dolls, a superhero collection, other great toys and antique advertising headline Morphy’s May 25 Discovery sale.
DENVER, Pa. – Fine antique German, French and American dolls from two different estates will share the spotlight at Dan Morphy’s May 25 Discovery Auction, featuring 599 lots. One of the doll collections is from Altoona, Pa., while the other has come to Morphy’s from the Midwest. Together, they present a comprehensive array of beautiful dolls from the 19th and 20th centuries.
“This is a nice, fresh selection of dolls from collections that have been out of sight for more than 35 years,” said Morphy’s CEO, Dan Morphy. “There are some excellent examples in the sale, from makers that are highly sought after. All of the dolls are very clean, with estimates ranging anywhere from $50 to $2,500. I think these two collections of dolls are going to be very well received.”
Among the many Bye-Lo dolls in the sale is a grouping of three bisque babies in a wicker basket, estimated at $300-$400. A 27-inch mechanical ballerina with A.M. 390 bisque head, composition and wood body, and long, original human hair wig is presented on a 7-inch stand. It is expected to make $300-$500.
Nicely attired in a scarlet, puff-sleeved frock, lace leggings and lace-trimmed hat, a 20-inch French bisque F.G. child doll with jointed composition body marked “Bebe Jumeau” is entered in the sale with an estimate of $1,800-$2,500.
A fine German bisque Kammer & Reinhardt character toddler doll, 17 inches with blue sleeping eyes and fully jointed toddler body could realize $600-$800, while a 121 character baby by the same maker, 24 inches and with a bisque head, is expected to reach $400-$600. A 24-inch German bisque Kammer & Reinhart character baby doll, mold 116/A, with painted upper teeth and jointed composition baby body, is estimated at $1,500-$2,500.
Made by Kley & Hahn (K & H, Germany), a 17-inch bisque character doll with jointed composition body, brown sleeping eyes, closed mouth and dimples, could settle somewhere in the $2,500-$3,500 price range.
Desirable Martha Chase cloth dolls include a 37-inch “Hospital Doll” in a vintage boy’s sailor suit, estimate $500-$700; and a 26-inch “Hospital Baby,” estimate $300-$400.
Two novelty items to be auctioned consecutively are a duo of papier-mache parade masks fashioned as animal heads – a hunting dog, which is estimated at $200-$300; and a smiling rabbit with pink nose, eyes and inner ears, estimate $250-$350.
Another featured collection comes from Boston and consists of Japanese superheroes, “Circus Punks” and vinyls. Examples estimated at $100-$300 apiece include boxed Mego action figures of Batgirl, Aquaman, Shazam, Catwoman, Wonder Woman and Captain America. A 1976 Aladdin tin lunchbox and thermos featuring Superheroes like Thor and Spiderman could serve up a winning bid of $200-$400.
The auction includes many other types of toys – both antique and vintage – including Buddy ‘L’ pressed steel vehicles, Disney, board games, teddy bears and Steiff soft toys.
A colorful lineup of antique advertising will be offered, with breweries, soft drink bottlers (including Coca-Cola) and tobacco companies all well represented. Still other categories on the auction roster include bisque and china figurines, artworks and Bakelite jewelry.
There’s so much more from which to choose in Morphy’s May 25 Discovery Auction. We hope you’ll join us to bid live, absentee, over the phone or live via the Internet through either MorphyLive or LiveAuctioneers.com.
What will you discover in Dan Morphy’s May 25 Discovery Auction? Visit the online catalog to find out.