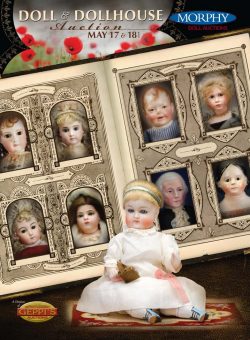 DENVER, Pa. – If Morphy Auctions’ May 17-18 Fine Doll premiere could be summarized in one word, it would be “flawless.” The $1.5 million sale that exceeded its overall high estimate by $300,000 was the culmination of six months of intensive preparation under the watchful eyes of department co-directors Becky and Andy Ourant. “From start to finish, it ran like clockwork,” said Morphy Auctions’ chief operating officer, Dan Morphy. “The Ourants are the ultimate pros when it comes to producing a doll auction, and I can’t say enough about the knowledge and level of professionalism they brought to this important first sale for our Fine Doll department.”

“The sale went just the way we wanted it to go,” said Andy Ourant, who also served as one of the event’s auctioneers. “Being exposed to these incredible collections every day during the run-up to the sale, it might have been easy to forget just how incredible they were, but the people coming in to preview the dolls made comments that constantly reminded us.”

The predicted top lot, a very rare 24-inch French “H” (Halopeau) bébé dating to around 1880, came through with flying colors. Dressed in period clothing of pink silk and lace, the doll had been estimated at $50,000-$70,000 but attracted intense bidding interest that pushed it into the six figures and a final selling price $109,250 (all prices quoted include 15 percent buyer’s premium).

A superb circa-1885 Bru Jne bébé, 19 inches tall with bisque socket head, blue paperweight eyes and a dimpled chin, came complete with a wardrobe trunk containing four handmade dresses and many upscale accessories. Estimated at $15,000-$20,000 and described in the catalog as having “the face that collectors covet,” the fancy lass realized $40,250.

With hopes of earning $20,000-$25,000, a circa-1878 first-series portrait Jumeau bébé, 22½ inches tall with almond-shape paperweight glass eyes, closed mouth and pierced ears realized $29,900. An Internet bidder prevailed on another select lot: a 24½ inch circa-1880 “circle dot” Bru bébé. Dressed in pristine white cotton with an eyelet-trimmed cape and bonnet, the blond beauty handily surpassed estimate to settle at $28,750.

Becky Ourant, who said she was “thrilled” with the auction results, noted that “all-original dolls did well in every category.” She said that small French dolls, any dolls with period clothes or wardrobes, and those accompanied by blue ribbons won in doll shows contemporaneous to their eras of manufacture were keenly pursued. “There were more French fashion dolls in this auction than any other sale I can recall, and they all performed very well,” Becky said. “After the strong prices realized on day one, we thought perhaps things would slow down during the Sunday session, but they didn’t. The bidding started on a high note and never let up.”

Andy Ourant quoted postsale statistics that indicated 25 percent of the sale had been purchased via eBay Live Auctions, with another 25 percent going to phone and absentee bidders. The remaining half of the lots went to bidders on the floor. “That’s probably a perfect mix,” said Ourant. “I’m an old-school auctioneer and always like to see merchandise going home with bidders who’ve attended in person. We had a packed house. By 8:30 on the morning of the opening session, the parking lot was already full, and we were directing cars to the adjacent parking area.’

“There were so many comments from people who said they loved the way the showcases were set up in the round,” Andy continued. “At any time during the sale, bidders were free to look at the dolls. Because this was the company’s first doll sale, 90 percent of the people in attendance were new to Morphy’s. They liked the clean, spacious gallery and the polite, well-trained staff.”

Dan Morphy described the auction’s attendees as “passionate and sincere people who truly appreciated the dolls that were for sale. They were a pleasure and a delight to deal with.” Smiling, Morphy added that the audience also included an impeccably behaved standard poodle that happily rested at its owner’s feet throughout the auction.

Morphy Auctions’ president, John K. Snyder Jr., also attended the event, and commented: “The real stars of the auction were Becky and Andy Ourant, because of their manner, enthusiasm and love for what they do. …The way they cataloged and so thoroughly researched and described the items to be sold, it felt like I was taking a college course.”

Morphy Auctions, a division of Geppi’s Entertainment Auctions, will conduct its next Fine Doll sale on Oct. 10-11. The auction will include the collections of sisters Eleanor Lakin Taylor and Pat Lemkuhl. For additional information, call Morphy Auctions at 717-335-3435 or e-mail dolls@morphyauctions.com. Full prices realized from the May 17-18 sale may be viewed online at www.morphyauctions.com.

With a bisque socket head, blue paperweight eyes and a dimpled chin, this superb 19-inch-tall, circa-1885 Bru Jne bébé sold with wardrobe for $40,250.

German made, probably in Nuremberg, this early 19th-century toy is comprised of a painted composition Prussian officer in full dress atop a rearing horse. Standing 11 inches high on a wood platform, the incredibly well-preserved toy galloped to $12,650.

Made around 1910 by Rhode Island dollmaker Martha Chase, this 37-inch “Chester” doll came with a steamer trunk filled with clothes, and provenance from the Atlanta Toy Museum. A patriotic little fellow, complete with stars and stripes umbrella and snare drum, Chester earned $5,750.

Made in France around 1860, this elaborately inlaid brass and wood box contains a musical mechanical band of papier-mâché musicians in original Middle Eastern dress. It sold for an above-estimate price of $7,475.

This circa-1870 Jumeau doll with bisque socket head and cobalt-blue glass eyes was one of the best-dressed ladies in the sale. Complete with extensive wardrobe including such minutiae as calling cards, opera glasses, rosary beads and a writing tablet, the doll realized $11,500 against an estimate of $6,000-$8,000.

Very few petite-size circa-1880 Mystery Dolls’ Houses (29 inches high by 25 inches wide by 15½ inches deep) like this one have been documented. The American Victorian detailing holds great appeal with collectors. In very fine condition with often-missing original wallpaper intact, the dollhouse was bid to $11,500.

Made by Simon & Halbig, a circa-1880 peddler doll with twill body and bisque head offers her tiny wares from a woven basket. At auction, the convincing saleswoman brought a premium price of $8,625.