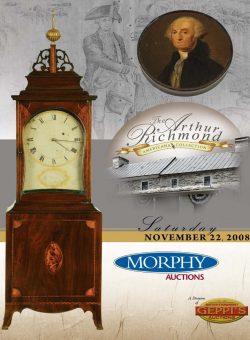 DENVER, Pa. – Unfavorable fourth-quarter news from the financial sector produced some choppy waters for the auction trade, but Morphy Auctions’ Nov. 22 sale of the Arthur Richmond Americana collection maintained a steady course to finish at $495,000, inclusive of 15 percent buyer’s premium. “Even in a good market, I don’t think the sale would have done much more,” said Morphy’s chief operating officer, Dan Morphy. “Mr. Richmond came in to the gallery and shook hands with all of our staff, and told them it was a job well done.”

The 534-lot, single-consignor event featured a 39-year collection of early clocks, mirrors, needlework and blacksmith-forged ironware as well as a selection of American paintings from Arthur Richmond’s historic 1780 residence in Purcellville, Virginia.

“We’ve offered interesting examples of American furniture and art in many of our past sales, but this sale was very different,” said Morphy. “Arthur Richmond is an avid antiquarian and American history scholar. For the past 16 years has lived in a house of great significance, in Loudoun County, Virginia, an area that has produced many important early American treasures.”

Many outstanding clocks were offered, from banjos, shelf and mantel styles to regulators and tall clocks. The auction’s top lot was a circa-1785 Massachusetts Federal tall clock by Simon Willard. In a figured-mahogany Roxbury case with 8-day time-and-strike brass movement, it retained its original Simon Willard label and also included a dated 1829 note hand-signed by the famed clocksmith. Estimated at $40,000-$60,000, it sold to a bidder in the room for $63,250.

A circa-1800 Federal shelf clock by Aaron Willard, in a mahogany case with pierced fretwork, decorative inlays and flaring French feet, achieved the second-highest price of the day: $23,000. Another Federal shelf clock of the same period by the same clockmaker featured wavy metal hands and a painted iron dial signed Aaron Willard Boston. It landed within estimate at $11,500.

Smaller-scale Southern furniture, such as sugar chests and bottle chests, has never gone out of style with collectors. A beautiful late-18th-century Southern Chippendale mahogany cellarette from the Richmond home had been entered in the sale with a $2,000-$4,000 estimate. It more than doubled expectations to settle at $8,625.

An 18th-century American Chippendale mahogany dumbwaiter with three dished tiers and a tapered column with riang and lower urn turnings well surpassed its estimate to serve up a winning bid of $3,450.

Several musical instruments and accessory items were auctioned, including a standing harp, pianoforte, three flutes and a Continental violin. Bidding was strong for a 19th-century Queen Anne-style music stand, which hit a high note at $2,875 against an estimate of $800-$1,200.

A real estate broker and businessman, Arthur Richmond made it his mission to fill his residence – which is listed on the National Register of Historic Places and known as the Samuel Purcell House – with exactly the types of objects and art that might have adorned it many generations ago. His particular fascination with America’s first President led to Richmond’s many acquisitions of George Washington-related artwork and ephemera, which were a focal point of the sale.

A 44-inch-tall, 19th-century cast-plaster bust of America’s first President was presented on a white marble and ormolu-decorated pedestal. Against an estimate of $1,500-$2,000, it sold to an Internet bidder for $4,600. Standing 13¼ inches tall, a circa-1800 Parian statue of Washington, with his name impressed on the base, was purchased for $2,587.50. And a French papier-mâché snuffbox with Washington’s half-length painted image [ex Lammot du Pont Copeland Collection] moved on to a new owner for $3,450.

Washington paintings, as a whole, performed on or near par. The widely publicized 19th-century oil-on-canvas portrait of Washington wearing a crimson jacket missed its $12,000 low estimate when it realized $10,350; but a full-length 36.3-inch by 25-inch “Lansdowne” portrait attributed to Jane Stuart (American, 1812-1888) achieved expectations at $7,475.

Antique textiles were led by an 18th-century English Queen Anne mahogany table-top firescreen. Standing 23 inches tall, it displayed a framed multicolor crewelwork design of flowers and leaves on a tripod base. It handily surpassed its $1,000-$1,500 estimate to stitch up a winning bid of $4,887.50.

Important books and documents from America’s colonial period featured prominently in the sale. A rare 1776 edition of Thomas Paine’s Common Sense – a first British edition, probably of the third issuance, came with provenance through the Lenox Library, New York. It reached the upper end of its estimate range, selling for $3,450.

An 1883 celestial globe by Josiah Loring of Boston featured a brass pointer and full meridian, as well as a horizon ring showing all the signs of the Zodiac, and days and months of the year. On a walnut tabletop stand, the 18-inch-high conversation piece sold within estimate for $2,300.

Many interesting early American and English wrought-iron and brass objects were auctioned near the end of the sale, including trivets, utensil racks, tea kettles, tongs, cooking implements and other fireplace accoutrements. The highest price paid within this grouping was for an English clock jack signed T. Reynolds Wadesbridge. Made in the 18th century, with its original flywheel in working order, the unusual and still-functional household item for $4,600.

Dan Morphy noted that the Internet played a significant role in the day’s results. “There was a lot of online bidding,” he said. “That, together with the strong crowd in-house, resulted in more than 650 registered bidders. It was a very busy day.”

The sale of the Arthur Richmond collection represented the first dedicated sale of Americana to be conducted at Morphy’s. “Many of those who attended were new to us – it was their first time to visit our gallery,” Dan Morphy said. “We heard nothing but positive feedback from them. They really liked the gallery’s layout, the way the goods were displayed, and the courtesy of our staff. This was very gratifying to us, since we put so much effort into the marketing and presentation of every one of our sales.”

This circa-1785 Massachusetts Federal tall clock by Simon Willard, in a figured-mahogany Roxbury case stands 92½” tall and is signed Simon Willard on its iron dial. Additionally, it retains its original Simon Willard label. It sold for $63,250.

A 1776 British first edition, probably third printing of Thomas Paine’s Common Sense came with provenance from the Lenox Library, New York. It sold near the top of its estimate range at $3,450.

Made in the 19th century, a Queen Anne-style music stand strummed up a winning bid of $2,875.

Manufactured by Josah Loring of Boston in 1883, this celestial globe includes the signs of the Zodiac on the horizon ring, and has a brass pointer. Set in a turned-walnut table-top stand, it made $2,300 at auction.