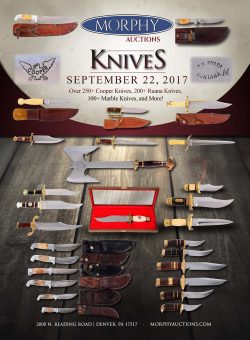 This single consignor premier knife & weaponry sale will host the largest collection of Cooper Knives to ever hit the auction block at one time. John Nelson Cooper (1906-1987) made knives for over 60 years, Cooper made knives for police, FBI, and celebrities such as John Wayne, Sammy Davis Jr., and Lee Marvin. The Bowie Knives made for the movies “Jeremiah Johnson” and “The Sacketts” were made by Cooper.

This auction features a collection of 2,500 custom made fixed blade knives by J.N. Cooper, R.H. Ruana, Hale, McCarty, and others. Included in this collection is a Cooper battle axe, which is a one and only example. There are massive Bowie Knives by Cooper, called the “Iron Master” and the “Iron Mistress”. A large Cooper fighting knife with a Knuckle Duster guard. Several large fighting knives by Cooper.

Dr. Ralph “Skip” Rusco was born in Chicago in 1937. He earned the name “Skipper” from a family friend before he was born. His mother and father (Hamilton and Dorothy Rusco) were avid sailors of beautiful Lake Michigan and were often asked “When will the Skipper be born?” He was known as “The Skipper” to everyone he met.

Skip’s younger years in Chicago consisted of working paper routes, serving as an elevator operator, working in the rail yards, and sailing Lake Michigan with his parents and their friends. He attended Olivet College in Bourbonnais IL and was accepted to medical school at the Chicago College of Osteopathic Medicine. Upon graduation, he practiced medicine and served as a General Physician in Osteopathic Medicine with a family practice for over 20 years in Oak Lawn, Illinois.  In 1987, he moved his practice to Venice, FL where he continued to practice family medicine for almost 30 more years.

His collection of knives began in the early 1970s shortly after his father-in-law had given him a knife as a gift. Ironically, it was the exact same knife that Skip’s father owned. From that point on, Skip took a very serious interest in the collection of unique and high-quality knives. Arguably, Skip may have one of the largest collections of knives consisting of manufacturer names such as Marbles, R.H. Ruana, and Cooper. He also purchased one of the first hand-made knives of Roderick “Caribou” Chappel. The stories and the care given to every individual knife would be too arduous to try and list. With over 40 years of being a subject matter expert and his meticulous attention to detail, Skip Rusco’s collection of vintage, one-of-a-kind knives is unparalleled.

His additional hobbies included annual fishing trips to Canada, visiting Las Vegas, wood carving, sailing/boating, watching old westerns, “Puttsing around in the garage” as his wife would say, telling tall-tales, and spending time with his family.  Skip has four children (Lynn, Lori, Scott, and Jason) and eleven grandchildren ranging in ages from 39yrs old to 12yrs old. His sister, Lois Lewis, resides in Sarasota Florida. He will always be remembered as “Skip”, “Grandpa”….or “Dad”.