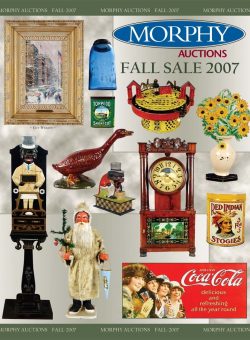 DENVER, Pa. – Morphy Auctions chalked up another outstanding sale result Sept. 5-8 at its recently expanded gallery as a diverse array of fine and decorative art, antique advertising, toys and black Americana shot past the $1.6 million mark. An extraordinary vending machine with wide-ranging appeal to collectors of antique advertising, coin-ops, candy-related items and black memorabilia walked away with top-lot honors at $43,700 (all prices include 15 percent buyer’s premium). With a total height of 68 inches, the German-made figural dispenser featured an unusual action – upon the deposit of a coin, the top-hatted gentleman on the front of the machine would “dance” and roll his eyes from side to side as a sweet was dispensed. One of very few extant examples, the coveted vending machine came with its original key and supply of usable coins.

Several of the best-performing items in the sale came from a single, long-held black Americana collection. Heavily previewed, a candy container comprised of a figure of a black man, smoking a cigar and riding a harnessed pig with removable head, well exceeded its presale estimate to bring $8,050. Other categories whose black-themed entries drew high interest included cast-iron doorstops – with a little boy sitting on a basket trampling its $2,000-3,000 estimate to settle at $8,600 – and tinplate windup toys. A boxed Lehmann Mixtum variation, with black clown driver in a cart, put the pedal to the metal to fall just $10 shy of its high estimate, at $6,900. Also, a rare German push-along toy of a top-hatted black “dandy,” accompanied by its colorful original box, went the extra mile to secure a winning bid of $3,450.

The benefit of crossover interest continued its run as the only known example of an 1897 McLoughlin Brothers Parlor Base Ball game took the podium. Featuring incredible coloration and a classic image of a batter and catcher in late-19th-century baseball attire on its box lid, the game was a “hit” with bidders, earning $13,800 against an estimate of $7,000-$10,000.

Strong prices were paid in all areas of antique advertising. A 1930s reverse-painted, cardboard-backed glass sign with a glitter effect, advertising ice-cold 5-cent Coca-Cola, sailed past its $5,000-$8,000 estimate to realize $15,000. Both a round porcelain sign for Red Rooster Fruit & Produce and a large (16½ inch long) Dr. Pepper lithographed-tin serving tray from around 1900-1905 earned an individual selling price of $8,600. And a Red Indian Stogies cigar/tobacco tin emblazoned on both sides with a colorful image of an Indian chief with headdress and necklace well outdistanced its estimate to knock down $6,900.

Within the fine art grouping, a signed Guy Carleton Wiggins (American, 1883-1962) oil-on-canvas depiction of a snowy scene at Fifth Avenue and Second Street in New York fared best. The attractive Impressionist work featuring weather-challenged pedestrians with umbrellas, vehicles of various types, and two American Flags achieved $23,000 against an estimate of $10,000-$15,000.

Other noteworthy results from the 2,659-lot sale included a Good Humor Ice Cream sign picturing a chocolate-covered confection with a bite taken out of it, $6,000; a Red and Blue Crushed Plug brand tobacco pocket tin, $6,325; and an 1880s German Father Christmas candy container swaddled in a white mohair robe and holding a feather tree and cornucopia, $7,320.

Morphy Auctions, a division of Steve Geppi’s Diamond International Galleries, will conduct the one-day, single-owner sale of the Stephen and Marilyn Steckbeck mechanical bank collection on Oct. 27. The company’s Winter 2007 auction will take place Dec. 6-8. Additional details regarding these sales may be viewed online at www.morphyauctions.com. Questions: call 717-335-3435 or e-mail morphy@morphyauctions.com.

A German-made Unicum chocolate dispenser, one of very few known, was top lot in the sale at $43,700.

Exhibiting magnificent coloration and a superb visual, this McLoughlin Bros. Game of Parlor Base Ball crossed home plate at $13,800.

Few items in the sale were taken out of their showcases as frequently as this one was. A candy container depicting a man riding atop a harnessed pig, it raced to $8,050.

With its rare original box, a rare black-clown variation of Lehmann’s Mixtum windup toy steered to winning bid of $6,900.