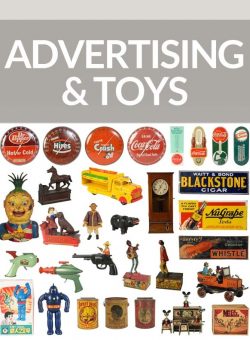 Over 100 thermometers are entered in the sale and represent most of the soda companies collectors favor. Many rare examples are seen in this group, which also includes scarce signs and trays.

A nice selection of brewery tip trays and serving trays will join an array of chalk figures and signs. Additionally, the advertising line-up features pocket mirrors and tip trays with wonderful advertising and graphics.

Next up will be tobacco tins – many of them offered in larger lots – and a few lots of shaving mugs.

A few coin-op pieces, including dispensers and poker machines, will be followed by phonograph accessories and an attractive selection of posters, mostly of World War II vintage.

Then it will be time for cast-iron bookends, doorstops and still banks, both of cast iron and tin.

Many Book of Knowledge banks and mechanical banks are included in the sale. Most are in excellent condition and a few are antique. Horse-drawn cast-iron toys and glass candy containers also will be offered..

The emphasis on variety in this sale allows for such specialties as Schoenhut figures and animals; Steiff toys (mostly bears), and a miscellaneous section of toys, mostly tin wind-ups by Chein, Marx, Wolverine, Unique Art and other makers.

Toward the end of the sale a large grouping of cap guns will be rolled out, with most retaining their original holsters. They will be followed by space guns, space toys, pressed-steel toys and sports memorabilia.

Morphy’s team always strives to produce auctions that include buying opportunities for all collector levels. The January 14 sale is no exception.