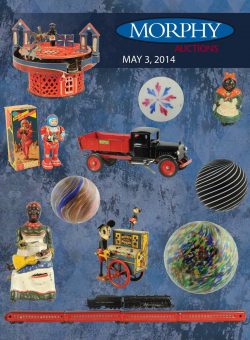 DENVER, Pa. – Toys, banks, robots and trains are always in demand at Morphy’s, and as any number of their regular bidders would attest, there’s always at least one great discovery in each of the busy Pennsylvania company’s sales. Their 915-lot toy auction slated for Saturday, May 3rd is no exception, with several seldom-seen marbles and rare banks creating pre-sale excitement.

The day will open with an offering of 350+ marbles, a category that has developed quite a dedicated following at Morphy’s. “The marble market is unbelievably strong right now, with a lot of new buyers and new money coming into the hobby. Prices are on the upswing,” said Morphy Auctions CEO Dan Morphy. “We had excellent marble sales at the New York Pier Show – and that’s a general antiques show, not a toy show.”

Morphy said marble buyers at his auctions are a diverse, across-the-board demographic that includes young and old, male and female. “There’s no pattern to it. They’re miniature works of art that appeal to everyone.”

There’s already a buzz over the lineup of mechanical and still banks to be auctioned, especially the near-mint-plus J. & E. Stevens Horse Race mechanical bank, patented in 1871 and accompanied by the original box with original label. The box is one of only three or four known examples.

“It’s an absolutely beautiful example,” said Morphy, explaining that it came to him via an online appraisal service Morphy Auctions offers free of charge. “The bank came from the Southwest, from a family that has kept it for three generations since its original purchase. It’s one of those undiscovered gems that turn up every once in a while, and when they do, they energize the hobby.” The bank’s sturdy wood box with pictorial paper label shows no fading and retains its early Bakelite-type pull-tab. The bank is estimated at $40,000 to $60,000, but Morphy said he “would not be surprised if it brought more.”

Two other high flyers among the banks are a near-mint Calamity bank, est. $30,000-$40,000; and a near-mint semi-mechanical American Bank Sewing Machine, est. 20,000-$25,000, that accepts a deposited coin when a crank is turned to lift the sewing needle up and down. A scarce dark-green-dress variation Mammy with Spoon mechanical bank is entered with a $6,000-$9,000 estimate, while a near-mint Uncle Remus with skillfully painted facial highlights could make $10,000-$15,000. All four banks are in 100% original condition.

More than 80 black Americana lots will be sold, with highlights including a Cascarets Summer bowel Troubles advertising poster, $1,000-$1,500; and a late-19th-century Imperial Egg Food poster that depicts African-American men preparing and loading Imperial Eggs, $2,000-$3,000. A complete set of Messett’s Musical Entertainers posters, each depicting minstrels in different poses, will be offered in three consecutive lots. They are estimated at $800-$1,200 each.

A Distler Walt Disney Mickey and Minnie Mouse Hurdy Gurdy in fine original condition is estimated at $6,000-$9,000 and leads a selection of 100+ mixed tin toys. A sampling from this grouping includes two Marx toys with individual estimates of $800-$1,200: a boxed, near-mint wind-up Rocket and a G-Man Pursuit Car with original box. A Japanese Atom Jet racecar could cross the finish line at $1,500-$2,000.

A formidable fleet of pressed steel toys is led by three Buddy ‘L’ favorites. A 1926 Outdoor Railroad engine, tender and stock car are entered with a $2,500-$3,000 estimate, as is a Deluxe Hydraulic Truck. A near-mint Sand and Gravel Truck could deliver a winning bid in the $4,000-$5,000 range.

Morphy’s railway yard will be an active spot on auction day, with more than 100 train lots from which to choose. Most of the trains are of American manufacture, including many by Lionel. Two examples are a boxed near-mint Lionel 709W Rail Chief passenger train set estimated at $12,000-$18,000; and an excellent Lionel O gauge No. 773 Madison passenger car set, $800-$1,200.

Morphy’s May 3 Toy, Bank, Marble and Train Auction will begin at 9 a.m. Eastern Time. All forms of bidding will be available, including live online through Morphy Live (www.morphyauctions.com), LiveAuctioneers or Invaluable. For additional information on any item in the sale, call 717-335-3435 or email info@morphyauctions.com.