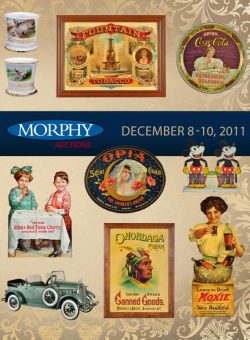 Morphy Auctions has a holiday treat in store for toy and advertising collectors: a 3-day sale so big they’re turning back the clock to an earlier-than-usual 9 a.m. start time. The Dec. 8-10 auction contains 2,620 lots, and in keeping with Morphy’s tradition, nearly all of the merchandise comes straight from collections and is fresh to the market.

The Thursday session will be ushered in by 150 lots of occupational shaving mugs. Among the rarest entries are mugs depicting boxers, a veterinarian treating an ailing horse and a sea captain’s ship, but the entry that may attract the most interest is a group lot of two brothers’ mugs with a historical connection. “The mugs belonged to the Duesenberg brothers, who produced automobiles but actually began as bicycle manufacturers,” said Morphy Auctions CEO Dan Morphy. “Each of the mugs has a picture of one of the Duesenberg brothers on a bike. The mugs will be sold as a single lot together with a letter of authenticity and other documentation. It’s a great archive.” The estimate is $10,000-$15,000.
The rest of the Thursday session is devoted to toys and figural cast iron pieces. The 250 general toy lots include examples of tin, cast iron and other metals. There will be 10+ cast-iron airplanes, including a Dent tri-motor Question Mark plane, est. $4,000-$8,000; and two major Marklin tin boats – a 24-inch Jolanda estimated at $10,000-$15,000; and a 27-inchbattleship from Marklin’s third series, est. $12,000-$18,000.
A fantastic collection of 20 wooden model ships indicates the care with which the consignor preserved them, as each is housed in its own custom-crafted showcase. Highlights include a 56-inch Victory, est. $12,000-$18,000; and a depiction of a 1799 36-gun frigate, est. $5,000-$7,000. “These ships are very impressive and have the best detail I’ve ever seen,” said Morphy, noting that the other half of the consignor’s collection was sold in a Sotheby’s sale years ago.
Without question, the rarest toy in the sale is the Distler tinplate Slate Dancer variationfeaturing two Mickey Mouse figures on a single platform. “This is the only double Slate Dancer we’ve ever seen. We asked around to see what others thought, and everyone told us this was the only one they knew of,” said Morphy. The German-made character toy is expected to make $20,000-$30,000 at auction.
The 100 pieces of cast iron to be offered include an 8½-inch Hubley Fox doorstop. “Our figural cast iron experts, John and Nancy Smith, say it’s the only one they’ve ever seen. It’s a good local piece from Lancaster (Pa.),” Morphy said. Estimate: $2,000-$3,000. A cast-iron highlight with crossover appeal to tobacciana collectors is the doorstop depicting an Indian maiden cigar store figure, est. $1,500-$2,000.
A collection of 150 Star Wars figures contains many prototypes and one of a kind designs. Top lots include a Droid Vlix carded figure, $2,000-$3,000; a Droid Kleb Zellock prototype (made in 1986, never released), $2,000-$3,000; and an Ewok Paploo prototype, $1,500-$2,000.
More than 100 pressed steel lots will roll across the auction block, including pedal cars. The grouping includes a Steelcraft tandem custom lowboy truck and trailer, $4,000-$5,000; a custom-built Ford pedal car, $3,000-$4,000; and an American National Ford Roadster, $1,500-$2,500.
The Thursday session will conclude with a 20-lot collection of rock music artwork. An album “slick” for the