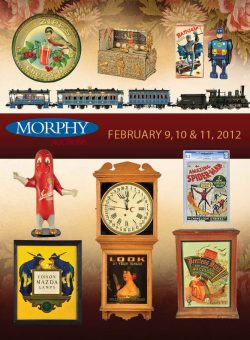 More than 2,000 lots of antique toys, trains, advertising and rare comics are primed and ready to make their appearance Feb. 9-11 in Morphy Auctions’ first sale of 2012. All forms of bidding will be available, including live via the Internet, with start times set for 10 a.m. on Thursday and Friday, and 9 a.m. for the Saturday session.

Following the soda pop section, there will be 150 general advertising lots, including an Ingraham Hills Liver Ticker reverse-on-glass clock with the image of a pretty girl, $3,000-$4,000; and a small grouping of dye cabinets, including examples for Peerless Dyes and  Diamond Dyes, which have a fairy motif.

After a very successful initial outing in December at Morphy’s, part two of an advanced collection ofadvertising figures will cross the auction block, together with additional consignments of comparable quality. In all, there are approximately 100 lots of figures spanning the timeframe from the 1920s through 1950s.

“There’s a great variety of products represented,” said Morphy Auctions associate Mike Karberg. “Any product you can imagine is included, from alcoholic beverages and sporting goods to clothing, food and consumer goods.”

Highlights from the collection include an extremely rare Mr. All-American Hot Dog figure advertising Jordan’s Franks. The character is essentially a hot dog with arms, and could make $1,000-$2,000 at auction.

Within the collection are four figural advertising pieces featuring Esquire magazine’s dapper mascot, Esky. A full-face Esky mask suitable for a person or mannequin is estimated at $600-$800, while a 24-inch composition “Palm Beach” Esky with wicker fedora is expected to fetch $1,000-$1,500. The third and fourth examples are a 6-inch plaster Esky paperweight with “Sell” embossed on the base, est. $650-$850; and a 6-inch magazine prop, est. $350-$450.

From a different consignor, a 1940s composition figure depicting the “Kelvinator Lady” and advertising the company’s refrigerators has the name of the manufacturer written across the base. It is estimated at $800-$1,200.

The Friday session includes more than 50 pressed-steel toys (e.g., Keystone, Buddy ‘L’) and 150 tin wind-up and battery-operated toys, with many key items from Marx and Linemar. A clean Buck Rogers Rocket Fighter in its original box, a very nice Schuco teddy bear on scooter and a desirable boxed Batman battery op are among the top lots. A single-owner collection of approximately 80Howdy Doody toys will be offered, as well.

More than 150 European toy lots cover a range of automotive, nautical and other wind-ups. Around 50 colorful penny toys, mostly Continental in origin, are in excellent condition and come from a long-held collection. There are many autos, motorcycles and specialty figurals, such as an articulatedsailboat and soccer players kicking a ball (original to the toy) back and forth. An additional European lot in this section is a large Holland biscuit tin ship.

Among the 200 character lots are 50+ vintage wristwatches, many in their original boxes. Characters represented include Mickey Mouse, the Lone Ranger, Davy Crockett and Donald Duck. A Howdy Doody wristwatch store display is a standout in this category.

The Saturday session begins with 50+ figural cast iron lots, including bottle openers, doorknockers and paperweights. Cast-iron mechanical banks are led by a Perfection Registering Bank that Morphy’s CEO Dan Morphy says is “one of the nicest examples [he’s] ever seen.” Estimate: $25,000-$35,000. Other mechanicals include a Mammy with Spoon (blue dress version) and a near-mint Santa at the Chimney.

Over 100 cast-iron toy lots will cross the auction block, with a large assortment of motorcycles, trucks and cars by Hubley, Arcade and Kenton.

A wonderful selection of more than 200 toy train lots awaits bidders, with many pieces coming from the Estate of Kenneth J. Rohrbaugh. “The trains in the Rohrbaugh grouping had been on loan to the Lincoln Train Museum in Gettysburg, Pennsylvania,” explained Morphy’s Chief Operating Officer Tom Sage Jr.

The predicted top lot in the train section is an outstanding Lionel Mickey Mouse Circus Train set, complete with its original box and all cardboard components. Additionally, there are many excellent prewar Lionel O gauge passenger sets with original boxes, an American Flyer standard gauge stadium set in original set box, and a number of more-contemporary trains, including productions from MPC and MTH (Mike’s Train House.)

With the expert oversight of Brian Schutzer and Pittsburgh’s legendary Sparkle City Comics, Morphy’s will launch its new Comic Books division during the third session of the Feb. 9-11 event. More than 250 prized comics from an original-owner collection will be offered, including a 1963 The Amazing Spider-Man No. 1, CGC-graded in 8.5 condition, which is expected to realize $25,000-$30,000. Other anticipated top lots include a 1963 X-Men No. 1 and a 1963 Tales of Suspense No. 39 featuring the first appearance of Iron Man.

“We’re very excited that Brian Schutzer and Sparkle City are working with Morphy’s, now,” said Dan Morphy. “They know where the great collections are and have an excellent reputation in the comic book community. We see this as a division that will grow by leaps and bounds for us, and we’re proud of the 250-lot selection that will launch this new venture for us on Feb. 11.

All forms of bidding will be available for Morphy’s Feb. 9-11, 2012 Toys, Trains, Antique Advertising & Comic Book auction, including live at the gallery, phone, absentee, and live via the Internet through Morphy Live or LiveAuctioneers.com. The auction will commence on Thursday, Feb. 9 and Friday, Feb. 10 at 10 a.m. Eastern time, and at 9 a.m. on Saturday, Feb. 11.