Morphy Auctions sells Tiffany Studios ‘Poppy’ lamp for $541,200, eclipsing prices for all other Tiffany productions offered in their past auctions

“One of the messages mentioned that another Tiffany Poppy lamp with the same rare Favrile-glass base had just sold fifteen minutes prior to our lamp at another major auction house, but its final price there was $214,200 (with buyer’s premium included). Experts are in agreement that the difference between the prices achieved by the two lamps can be directly attributed to the glass selection,” Morphy said. 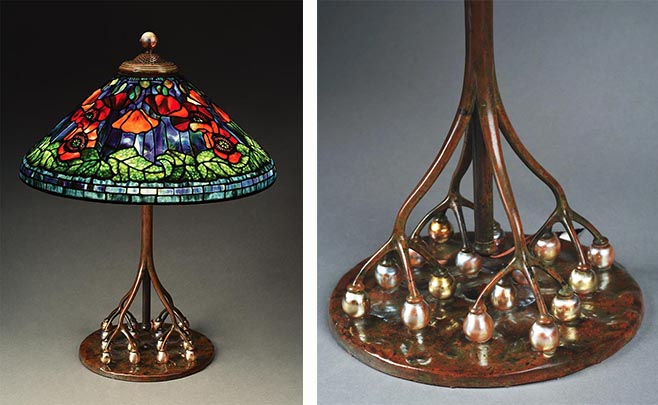 “We’ve sold other Poppy lamps in the $70,000-$125,000 range, but this one was in a league of its own. Only Tiffany’s most highly skilled artisans could have produced a shade of this standard. It’s a complex masterpiece, unlike any other we’ve ever seen,” Morphy said. “The design would have been laid out piece by carefully chosen piece, with the addition of intense cobalt blue glass that’s rarely seen in art-glass lamps.”

Throughout the month leading up to the sale, the enquiries and visitors asking to inspect the lamp were nonstop, Morphy said. “Even the most advanced Tiffany lamp collectors marveled at the shade’s superlative colorway and motif. It’s surely one of the greatest artworks ever to come out of Tiffany’s studios,” he said

The lamp sold by Morphy’s was sourced from a longtime Florida collection and is now the property of an American private collector who wishes to remain anonymous.