The Death of a Legend: Joseph Manton

In 2005, Nigel Brown, the legal advisor and secretary to the Gun Trade Association and team member of the British Association for Shooting and Conversation, published British Gunmakers: Volume 1, London. Rightfully considered one of the authoritative books on British gunmaking data, what gun would you have chosen to adorn the cover? Perhaps a Boss and Co, one of which this company sold for over USD$100,000 as recently as April of 2019, widely considered one of the finest doubles ever produced and quoted by the King of England as saying that he did not possess the funds to shoot a Boss & Co? Charles Lancaster produced a number of fine sporting arms, and a pair of over/under double rifles brought USD$78,000. Purdey is also a viable contender, one of their .410 Sidelocks brought as much as USD$50,000 in these halls. So, which all of these masterful makers, why did Nigel Brown choose to showcase a flintlock side-by-side Manton shotgun? Perhaps because Manton is one of the most influential gunmakers, not just in terms of sporting arms, but perhaps of all time. This article explores Manton’s history and his prodigy as a gunsmith and examines a firearm in our upcoming May Extraordinary Auction, one of the better Manton flintlock pistols.

Joseph Manton was born April 6th, 1766 to John Manton and Mary Gildon and in 1780 apprenticed as a gunmaker to his brother, John Manton, out of 6 Dover Street, London. It became increasingly clear that Joseph became the superior of the two gunsmiths between himself and his brother and in 1789 Joseph struck out in his own opening his own shop in Mayfair, on Oxford Street where he built quality guns. While building guns, Manton also spent a considerable amount of time experimenting with rifling, wadding, ignition, and any other system he could conceivably use to improve gun performance. Chief among his improvements was the tubelock system. As opposed to filling a pan with gunpowder and using a flint and pan to generate the spark and ignition, Manton developed a small-contained tube full of fulminate that, when crushed by a hammer, would discharge and provide ignition. The tubelock proved immediately exceedingly popular as the fulminate ignited much more quickly than flintlocks, providing an exceptionally fast lock time, reducing the amount of deviation the shooter could introduce into a moving gun. The Austrian army temporarily retained the tubelock, but eventually exchanged it for the percussion lock. Perhaps the greatest issue Manton’s tubelock had was where if the hammer did not adequately crush the tube of fulminate, the energy would expend into the vent and out of it, potentially wounding the shooter. Still, this was a step up from the Forsyth scentbottle lock (who, incidentally, successfully sued Manton for his use of the newly developed fulminate, which Forsyth had successfully attempted to patent-hog in Britain.)

Manton’s developments brought the attention of the British military, who wanted him to develop cannon more accurate than current manufacture. Manton agreed and developed a system using a detached wooden cup, shell, powder, and projectile that married together just short of the rifling, a primitive form of a cartridge, and a design similar to which the Reich would use with the Big Bertha Cannon. Manton would get into a rather expensive and lengthy legal debate with the military over payment. Manton wanted a lump sum payment equivalent to approximately three and a half million pounds, while the army wanted to pay him on a per shell basis (at a rate of approximately 0.13 pence per shell). During the litigation, the army purchased the wooden cups from Manton, but made their own shells, depriving Manton of both his lump sum and his per capita rate.

Despite the problems that plagued Manton, it would be disingenuous for me to imply that Manton was anything other than wildly well regarded in his own time. His guns sold at up to 70 guineas a piece (approximately 70 oz of gold, or well over USD$25,000 at this time of writing), and Manton himself was quoted as saying that he would increase the cost of his guns by five guineas every year and that people would still purchase his guns, they were so well regarded. Other important developments by Manton (or, at least, claimed by him), include platinum lined touch holes that resisted corrosion, gravitating cocks that would kept the cocks back when loading a muzzle loader and preventing an accidental discharge during loading, the coating of lead pellets in quicksilver in order to prevent barrel fouling, and numerous other upgrades to triggers, pans, sears, and any other conceivable part of a firearm. While it appears that Manton may have been a bit of a patent hog himself, even suing his own brother at one point, it is undeniable that Manton pioneered a massive number of important upgrades.

A clever reader may, at this point, have begun to ask themselves why I chose Purdey, Lancaster, and Boss to be competitors to Manton. There are a number of other wonderful shotgun makers coming out of London today, and Brown’s books lists many of them. The truth is that Manton’s contribution to the shooting world as we know it today also extended to training the following generation of sporting gun makers. Purdey, Lancaster, and Boss all worked for Manton. Also counted amongst Manton’s friends was Colonel Hawker, another noted sportsman, who arranged for a tombstone when Manton died celebrating his life and can still be viewed today.

This brings us to the gun in question that prompted this very article. Lot 1112 is a flintlock pistol made by Joseph Manton. Given the serial number, Manton made the gun circa 1802, making it a rather late flintlock but still well before the introduction of the tubelock. A hooked and patent breech allows for more efficient ignition of the charge, and is deeply struck with Manton’s hallmark. A roller bearing frizzen, waterproof pan, push on safety, and masterful execution of filing and engraving round out the features of the breech and lock. The stock is checkered at wrist and runs all the way down to the blued buttcap, itself also engraved. Adding some mystique to the piece is the silver thumbpiece with heavily worn initials, presumably for a previous owner. 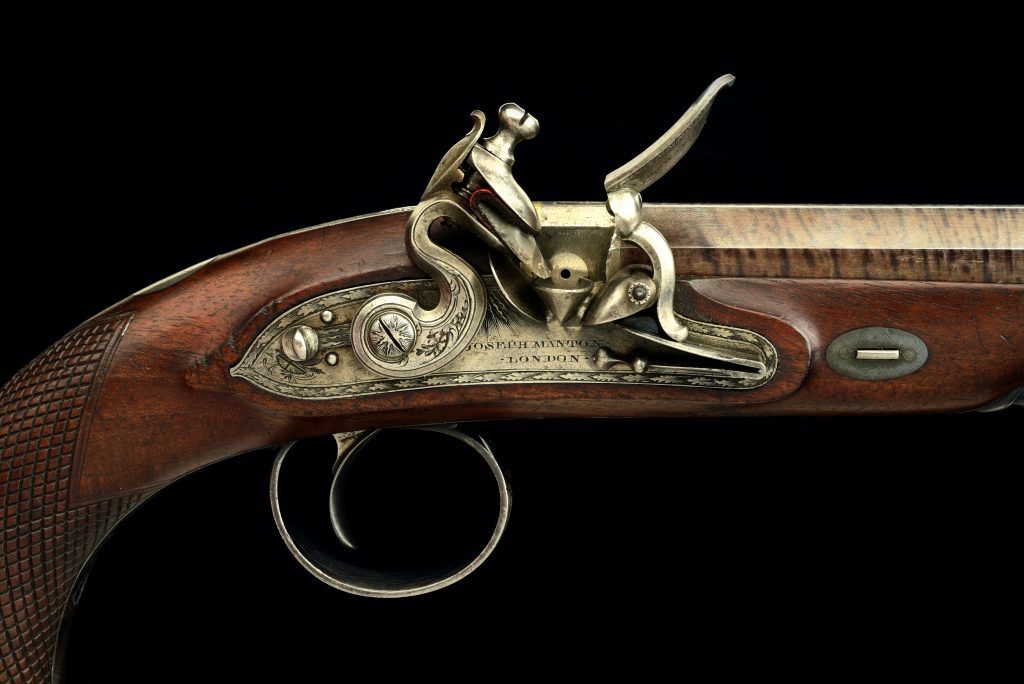 The pistol is cased in mahogany with the accessories that a pistol shooter would need for his firearm: loading rod and mallet, patches and flint, oil, and a very clever ball/powder/patch combination flask made by Dixon and Sons. Importantly, and the inspiration for this article, is the paper label in the lid, which is an aged Manton trade label with a handwritten note reading “Joseph Manton died, June 29. 1835, 6 Kensal Green, No. 189”. This is in fact Manton’s death date and where he was buried (amusingly enough, in a location that can be seen today from Holland and Holland’s factory.) Evidently, a previous owner of this fine firearm took note of the death of the legendary Manton and recorded it on one of his own products. Others also took note of Manton’s death, including his longtime friend Colonel Harker, mentioned earlier in this article, who wrote Manton’s epitaph, singing his praises as “the greatest artist in firearms that ever the world produced…the founder and father of the modern gun trade and as a most scientific inventor in other departments.” 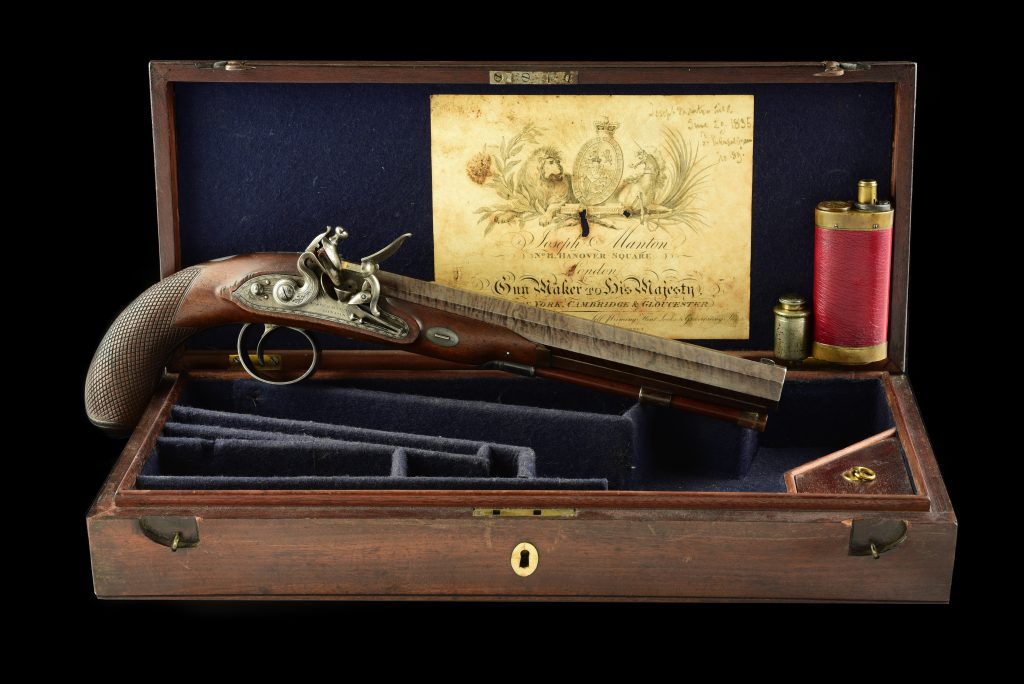 A recent discussion with a friend led to a conversation on the rapid progression of firearms technology, and it would be woe to mention that progression of technology without mentioning Manton. From frizzens and pans, to rifling and wadding, and the very bullets fired, Manton tried his best to improve every aspect of firearms, and today is rightfully lauded as perhaps one of the most important pioneers of firearms, not only for his own developments, but also as laying the foundation for future bespoke gunsmiths.