Ferguson breech loading rifles are considered to be the pinnacle of flintlock collectables, as less than two dozen are known to exist.  This exact rifle is featured and discussed on pages 37 and 38 of “British Flintlock Military Rifles: 1740-1840” by De Witt Bailey, Ph.D. There are four photographs of this rifle and a description which states that it is one of the two pattern Ferguson rifles supplied by famed London gunmaker Durs Egg to King George III and the Board of Ordnance in 1776. It is very probable that the King of England laid his hands on this very gun.  The board was extremely impressed with the tests, which were performed by Patrick Ferguson, himself.  He was very accurate with the rifle and was able to shoot accurately in poor conditions at an impressive rate of fire, from all positions, in a short period of time.  Many officer’s also witnessed the trials and ordered his rifles for their private use.  Walter O’Connor stated in regards to these rifles: “Internationally proclaimed one of the great rarities in antique firearms is the “Ferguson Rifle” as developed by Lt. Col. Patrick Ferguson (1744-1780) of the British 70th Regiment and patented by him in December, 1776.” Only 100 Ferguson rifles were made for military use during the Revolutionary War and only about 12 are known to exist today, with half of them in museum collections, thus unavailable to collectors. This desirable rifle will be offered as part of the Estate of Walter O’Connor to be sold at Morphy Auctions in Denver, PA on September 26, 2018 with an estimate of $75,000 to $150,000.

Patrick Ferguson, the patent holder for the rifle, was also an officer in the British military and served in America during the Revolutionary War.  He was a Scotsman and was reputed to be the best shot in the British Army.  On September 11, 1777, a detachment of British marksmen hid in the trees along Brandywine Creek, near Chadd’s Ford in Pennsylvania.  They we keeping a lookout for American forces led by George Washington as 12,500 British troops marched toward Philadelphia.  As he saw a senior American officer wearing a high cocked hat, 33 year old Ferguson took aim at the officer with his Ferguson rifle.  He then felt remorse about ambushing the men, especially the officer, who had his back turned to Ferguson’s position.  Ferguson was an officer and a gentleman.  Instead of shooting, Ferguson shouted at him.  The officer looked back, then slowly rode away.  The officer he had aimed at was, in fact, George Washington.  This well-known account is a testament to Ferguson’s character and shows how differently the Revolutionary War may have ended if he had fired.  Perhaps this was the very rifle he was carrying?  Ferguson was killed on October 7, 1780 at the battle of King’s Mountain in South Carolina. 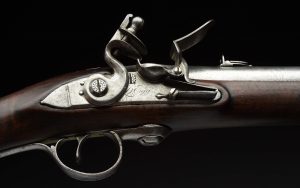 The example being offered features a tapered round barrel with deep seven-groove rifling and bayonet lug mounted on bottom, near the muzzle. The front sight is mounted on top and a fixed rear sight with an additional folding aperture sight leaf. The top of the barrel is marked “LONDON” in front of the rear sight and behind it, inscribed “D. Egg” with a small “2” stamped in front of it. The breech is stamped with the King’s proofs, the right side with a crown over crossed scepters and the left side with a crown over “GR” and a broad arrow. Forward of the breech plug is stamped with partially visible Ferguson family crest, the significance of which is currently unknown. The top of the breech plug is engraved with floral designs and behind it is stamped “FERGUS”. The finely executed lockplate has a flat face with beveled edges, the center inscribed “D. Egg”. The cock screw and lock retention screw are decorated with floral engraving. The ramrod ferrules, rear triggerguard tang, and buttplate are all tutenag (German silver). The steel triggerguard features an integral handle and is attached to the threaded Ferguson Patent breech plug. The Ferguson rifle in the Royal Armories Collection is also mounted in tutenag and numbered “15”. The rifle numbered “15” is listed in Patrick Ferguson’s will and was passed down through the family until purchased by collector Keith Neal before being purchased by the Royal Armories. Several sources state that the rifles made for Patrick Ferguson’s personal use were mounted in silver. The partially figured walnut stock has a brass band at the tip of the forend, which is retained to barrel with three iron keys. The rifle is complete with a period, possibly its original brass tipped baleen ramrod.

This extremely rare and historic rifle is in very good condition.  All of its steel components have been polished, as is typical for firearms that were kept in England.  It now retains a graying patina. The bore remains excellent with deep clear rifling.  The distinctive proof marks are deep and clear. All of the engraved markings are also clear, but show some light wear from polishing. There is some light freckling around the touch hole. The flintlock and breech-loading actions are tight and function flawlessly. The stock is very good, but upon close inspection, has a period English repair around the forestock, about 13-1/2″ back and a small thin sliver replaced along the left side, about 6-1/4″ long. There is a small professionally repaired crack between the triggerguard and the lock, which is a weak spot that these rifles were notorious for having. Otherwise, the stock retains an even and pleasing patina with some scattered marks from use. The German silver furniture retains a pleasing mellow patina. 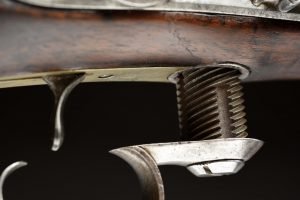 This Ferguson rifle has strong provenance and is very well-documented. It was first sold at Sotheby & Co. in London on December 13, 1971, as lot 71. A copied version of the catalog, featuring this rifle, is included. It was then purchased by renowned dealer and collector Eric Vaule, who purchased it from a gentleman in Canada in the 1970’s. A letter from Eric Vaule to Philip Baron Ennis, the man that he later sold the rifle to, is included. The rifle then was purchased by Dave McKee, who sold it to Walter O’Connor in 1994. The original receipt is still present, as well as Walter O’Connor’s archive of information on every known example, correspondence with Howard Blackmore, and a copy of “British Military Flintlock Rifles” by De Witt Bailey, featuring this rifle. This example is an extremely important and historic Ferguson pattern rifle, one of only two made by Durs Egg for presentation to the king for demonstration. 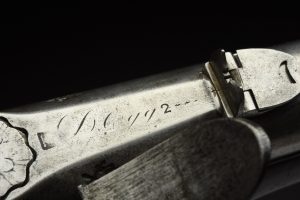